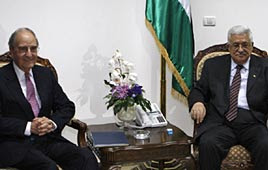 PA's chief negotiator Erekat says keys for saving peace negotiations in Israeli prime minister's hands. 'Peace and settlements are parallels,' he says. Palestinian officials estimate, however, that PLO will approve return to talks if Israel builds in settlements blocs only – under supervision

Palestinian Authority officials estimated Friday that the Palestinian Liberation Organization's Executive Committee would approve a return to direct negotiations with Israel, as long as the parties reached a formula to continue the settlement construction freeze.


The PLO's Executive Committee is scheduled to meet Saturday to discuss recent developments following US special envoy George Mitchell's visit to the region. According to the sources, Mitchell told the Palestinians that the Israelis were willing to halt construction in isolated settlements in exchanged for accepted construction in the settlement blocs.


A Palestinian source estimated in a conversation with Ynet that the Palestinian leadership would demand an American guarantee for supervision system which would inspect the construction in the large settlements and ensure that there would be no building in isolated communities.


Chief Palestinian negotiator Saeb Erekat said following the Mitchell-Abbas meeting that the Palestinians expected Israel to choose the path of peace rather than the path of settlements. "These are two parallels which cannot meet," he explained.


Erekat noted that the Palestinian demand was clear: Halting all settlement activities in order to give the direct talks a chance to succeed. He said that Mitchell had stressed during the meetings that the American administration would continue its efforts with both sides to achieve peace in the region based on a solution of two states for two people.


Erekat said that the keys for saving the negotiations were in the hands of Prime Minister Benjamin Netanyahu, who said earlier that the ball was in the Palestinian court.


"I have met all of my commitments to the Palestinians, the American administration and the international community," Netanyahu told his advisors in a closed conversation. "Now I expect the Palestinians to relax their conditions and stay in the talks."


According to the prime minister, "Everyone knows that moderate and restrained construction in Judea and Samaria in the coming year will not affect the peace map in any way. So the international community must call on the Palestinians to remain in the peace talks. This is a Palestinian interest just like it's our interest."

Meanwhile, senior Likud officials implied that they would support an extension of the West Bank settlement construction freeze in exchange for a "significant" incentive package from the American administration.