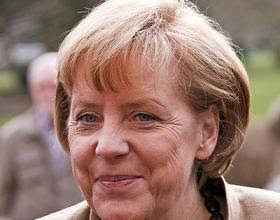 German chancellor Angela Merkel's speech last week to the Leo Baeck Institute (LBI) in Manhattan, when compared with her administration’s Iran policies, shows the gap between pro-Israel action and flowery pro-Israel rhetoric. The LBI, which researches German-Jewish history, honored Merkel with the institute’s prize for promoting “German Jewish reconciliation” and for supporting Israel. In her acceptance speech, Merkel said, “Our expectations from Iran include that it recognize the security and existence of the State of Israel. Both are never negotiable for Germany.” She also called for—in nebulous terms—a new round of sanctions against Iran but did not mention slashing her country's flourishing trade with the mullahs (which has increased at a 14 percent rate during the first six months of 2010 when compared to the same period in 2009). Merkel has skillfully used every opportunity (including in the U.S. Congress and Knesset) to champion her pro-Israel, pro-American, and anti-Iranian policies. But is she hoodwinking the Israelis and Americans with her rhetoric?

While Merkel was uttering the politically and socially correct statements about Germany's so-called “special relationship” with Israel and scoring superficial points at the LBI, German activists protested her failure to close the notorious EIH Iranian “terror bank” in Hamburg, which represents perhaps the greatest threat to the security of the Jewish state on German soil.

Another window into Germany’s pro-Iranian business position is Germany's leading business daily Handelsblatt, which has made great efforts over the years to oppose robust sanctions against Iran. Matthias Brüggmann complained last week in a commentary titled, “Why Sanctions are absurd,” that German firms have experienced “massive blackmail” from the U.S. to pull out of Iran. In short, companies such as Thyssen-Krupp, Siemens, Daimler, Deutsche Bank, Linde, Allianz und Commerzbank feared the loss of the U.S-based contracts and recoiled from Iranian deals in order not to jeopardize their business with the United States.

What Brüggmann and many German journalists fail to understand is flexing one's economic muscles to promote democracy and protect the West is the right form of American economic might. Invoking economic leverage to change despotic regimes should be embraced by Germany's young democracy, for it is a sign of democratic maturity. All of this means that if Chancellor Merkel wants to fill the German-Israeli “special relationship” with meaning and content at a critical security juncture in Israel's history, she should evict the EIH “terror bank” from Germany and crackdown on the vast sector of mid-level German engineering firms supplying Iran's infrastructure with invaluable technology. German corporations such as BASF and MAN, whose large operations in Iran are serving as a crutch for the Iranian regime, need to be roped in.

Chancellor Merkel can also, following America's lead, use Germany's economic leverage in Europe to compel the Swiss to walk away from their 18 and 27 billion euros gas deal with the Iranian regime.

The mere threat that Switzerland and its giant energy company EGL will be denied access to German contracts and markets would, without question, influence a radical change in the pro-Ahmadinejad attitude of Swiss foreign minister Calmy-Rey.

Roger Koppel, chief editor of the Swiss weekly Die Weltwoche noted in a Wall Street Journal Europe piece: "It is a miracle that her most disastrous act so far went almost unnoticed. In December 2006, she received an Iranian delegation for talks on the nuclear program. To the horror of her closest colleagues, she came up with the idea of improving relations by holding a seminar on differing perceptions of the Holocaust.”
Click here to read more
Posted by GS Don Morris, Ph.D./Chana Givon at 5:17 PM