The policeman's a good guy 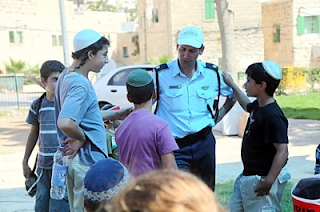 A couple of months ago I had a little shouting match with some of the border police next to Ma'arat HaMachpela, the tomb of the Patriarchs and Matriarchs. After a little while - when we had reached a dead-end - one of the regular police, a little older than the others, came over put an arm around my shoulders, pulled me over to the side and explained to me why I was wrong and they were right. I listened, and finally acquiesced to their demands, and the issue came to an end. This might sound fairly normal and logical, but then again, it must be remembered that this is Hebron. Had the same incident occurred seven or eight years ago, I am sure the ending would have been quite different. The relationship between police and civilians in this holy city was very different. Back then if a police officer approached me, it would not have been to put an arm around my shoulder, it would have been to handcuff, arrest, and start legal proceedings against me - and who knows what else.

However, things have changed. That's not to say that we live in utopia, but at present I certainly do not look at our local police force as enemies. I can truthfully say that I consider some of the police officers to be friends - and to a great degree, the emotions are mutual. Last week a policeman called me a Tzaddik (righteous person). Now, I bear witness that I'm surely not righteous, but hearing those words from a policeman in Hebron left me with the impression that we really are approaching the days of the Messiah!

It should be kept in mind that such episodes cannot be taken for granted. Not too long ago the relationship between police and Hebron citizens could easily have been defined as something similar to open warfare. The police were used as an extended arm of the Israeli political system, and utilized to victimize, oppress and even terrorize us. It wasn't enough that the community had to deal with Arab terror and leftist harassment. Every once in a while, while looking back through photos eight and nine years old, it's difficult to believe that we really had to deal with such brutality. And of course, people in the community didn't 'turn the other cheek,' causing major confrontations, which were quite messy, to say the least.

A few years ago, as the political scene began to change, so did the people comprising Hebron's police force. I was very surprised and to be honest, very suspicious. But over a period of time it became clear that somewhere, someone decided to attempt to change the rancid atmosphere which poisoned the relationship between the police and Hebron's Jewish population. And I can quite happily say that for the most part, it has worked.

For example, yesterday afternoon, Hebron's police sponsored a 'Police-Community Day.' True, not all the kids attended; it was very hot, some were on vacation, and others still have trouble digesting the fact that the police are not out to get us. But a nice group did show up, and enjoyed a fascinating exhibit of police dogs in action, were able to play-drive in a police car (complete with siren -every boy's dream), wear a police vest, carry around a police baton and receive a police hat.

I know this might not sound like much, but to even attempt to carry out such a program in Hebron would once have been thought of as something out of 'Alice in Wonderland.' But it did happen, and I enjoyed it very much.

Alas, innocence is a thing of the past. I'm very well aware that conflict can still arise. So what? Tension between police and civilians is not exclusive to Hebron. It's fairly common all over the world. In Hebron we face, frequently, unique situations which are liable to cause friction between the people in blue uniforms and the civilians. But today, I know that I'm dealing with normal, rational people who are not looking to break our bones because we're Jews living in Hebron - and that's very very important. I can only hope and pray that such a rapport continues, because it makes life much more pleasant and relaxed when you know that the policeman walking down the street really is a nice guy.
Posted by GS Don Morris, Ph.D./Chana Givon at 2:48 PM