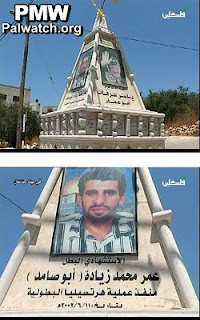 by Itamar Marcus and Barbara Crook

On June 11, 2002, a Palestinian suicide terrorist walked into a restaurant in the Tel Aviv suburb of Herzliya, and detonated a bomb that killed 15-year-old Hadar Hershkovitz and injured 16 others.
The town square in the West Bank town of Madama where the terrorist lived features a monument honoring "the heroic Martyrdom-Seeker" and his "heroic Herzliya operation." The monument has pictures of the suicide terrorist and of Yasser Arafat.

The text above the terrorist's picture is a verse from the Quran, urging Muslims to fight the non-believers and promising that Allah will "lay them low":

[Picture of suicide terrorist and Arafat on monument in town square in West Bank town Madama. [PA TV, May 15, 2010]
"Fight them, and Allah will punish them by your hands,
lay them low and give you victory over them,
and heal the hearts of a believing people." [Quran, 9,15]

Below his picture are the words:
"The heroic Shahada - Seeker (Martyrdom- Seeker, PA term of honor for suicide terrorists) Omar Muhammad Ziyada (Abu Samed) who carried out
the heroic Herzliya operation
on June 11, 2002"

In December 2009 and again in March 2010, PMW reported on the naming of another square after the terrorist Dalal Mughrabi, who killed 37 in a bus hijacking in 1978. World condemnation was unequivocal:

US State Department Spokesperson Phillip Crowley:
"We also strongly condemn the glorification of terrorists. Honoring terrorists who have murdered innocent civilians, either by official statements or by the dedication of public places, hurts peace efforts and must end. We will continue to hold Palestinian leaders accountable for incitement." [April 8, 2010]

US Ambassador Alejandro D. Wolff, U.S. Deputy Representative to the UN, in the Security Council:
"We strongly condemn the glorification of terrorists, either through official statements or by the dedication of public places." [April 14, 2010]

US Secretary of State Hillary Clinton, commented on the naming of the square after Mughrabi:
"... glorifies violence and renames a square after a terrorist who murdered innocent Israelis, it insults the families on both sides who have lost loves ones over the years in this conflict." [AIPAC Conference, March 22, 2010]
Posted by GS Don Morris, Ph.D./Chana Givon at 10:59 AM