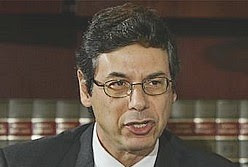 Deputy Foreign Minister Danny Ayalon, who caused a diplomatic crisis with Turkey this week, on Saturday implied that the country's ambassador could be expelled if Turkish TV dramas continue to depict Israeli security forces as brutal.

Ayalon touched off the feud earlier this week when he called in the Turkish ambassador to reprimand him over a TV program showing Israeli agents kidnapping children and shooting old men.

He seated Turkish Ambassador Ahmet Oguz Celikkol on a sofa lower than his own chair and wouldn't shake his hand in televised images of the meeting. Asked in a Channel 2 interview Saturday what Israel would do if another installment were shown with scenes it found objectionable, Ayalon replied, "Maybe we would expel their ambassador."

Asked again later by the anchor whether he was threatening to expel the Turkish ambassador, Ayalon said that a variety of responses would be considered against any nation whose actions hurt Israel, including the expelling of ambassadors.
This article can also be read at http://www.jpost.com /servlet/Satellite?cid=1263147904743&pagename=JPArticle%2FShowFull
Posted by GS Don Morris, Ph.D./Chana Givon at 12:06 AM