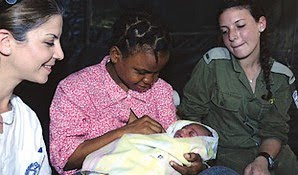 The IDF's field hospital in the Haitian capital worked at full capacity throughout Sunday, treating a relentless stream of victims from what a senior IDF medical officer described as "the war outside."

Overnight Saturday, in what staff described as one of the most fulfilling moments of their work, the Israeli doctors delivered a baby boy, whose mother, Gubilande Jean Michel, promptly declared would be named "Israel." Meanwhile, the IDF's rescue teams continued to play their vital role in the international race against time to find survivors from last Tuesday's quake. Team members saved the life of a customs clerk who had been trapped in his office by debris, and then sent him for treatment in the field hospital.

Israeli officials noted that, from their experience, it is reasonable to believe survivors can yet be located and extricated five or six days after a disaster of this kind, but very rarely beyond that time period.

With most medical facilities here out of commission, the Israeli hospital has drawn a constant throng of locals needing urgent medical care.

More than 100 survivors have been treated, with three in 10 in serious condition and 50 percent moderately injured. Children comprise more than half of the injured, most with limb injuries and bone fractures. Nearly a dozen lifesaving operations have been performed.

Set up in an industrial park, and staffed with 40 doctors, 40 nurses and medics, the hospital has been constantly treating patients since Saturday.

"There is no hospital around, so the ambulances started bringing patients here," said Col. Carmi Bar-Tal, the deputy head of the IDF emergency and medical unit. "There is a war outside," he said, gesturing to the compound's gates where a crowd was awaiting help.

Inside, the army tents house orthopedic, emergency and surgical units. Doctors are equipped to handle pediatric and adult emergency care. There are two operating beds, X-ray facilities and a laboratory. "We know that what we are giving them is the only thing they have," Bar-Tal said. "We discharge patients but don't know what awaits them afterwards. At least we gave them a chance to live."

Newly born Israel's mother Gubilande, who is 24, arrived by ambulance on Saturday night, accompanied by a cousin. She had left her three other children with her parents. Her husband has been missing since the quake.

Bar-Tal noted that the IDF's participation in 10 previous relief missions in catastrophic situations had given it vital experience for coping in this environment. "We have the capacity to help," he said. "We know how to bring medicine to the field."

Virgine Géré, 36, was brought in with a gunshot wound in her right shoulder.

Her boss accidentally shot her and the bullet penetrated her chest. On Sunday, she lay in a cot with tubes running straight from her chest. "For now, she is stable," said Dr. Noam Zeller Lion.

Besides the urgent need for medical care in Port-au-Prince, Haitians are desperate for water and food. Communication is spotty and fuel supplies are depleting. Some Haitians are crossing to the Dominican Republic to purchase supplies.

In Port-au-Prince, throngs of people lined up at gas stations to buy gasoline at $10 per gallon.

Throughout Sunday, crews worked to clear rubble from the streets. People picked through collapsed homes searching for victims. Nearly everyone here is living outside, since few structures are safe. The sprawling tent cities reek of desperation.

The Israeli rescuers have been well received by the Haitians. TV cameramen photographed survivors applauding and singing next to an IDF search and rescue team after they pulled someone out of a collapsed building. "Good job, Israel," the crowds sang over and over.

IsraAID has sent a medical team to the Port-au-Prince hospital, while ZAKA International has continued to search for survivors.

"The scenes in the hospitals were horrendous. Everywhere on the floors of the building and outside, there are people with amputations and bone-deep wounds, hundreds of them," said Sheve Cohen, a nurse from the Negev.

"The size of the catastrophe is unbelievable. All of
the injured were being treated, until we came by, by one local doctor. We were the first foreign backup team to operate in the hospital."

IsraAID is trying to expand its operation and additional teams will be sent next week.
This article can also be read at http://www.jpost.com /servlet/Satellite?cid=1263147915036&pagename=JPArticle%2FShowFull
Posted by GS Don Morris, Ph.D./Chana Givon at 6:00 AM