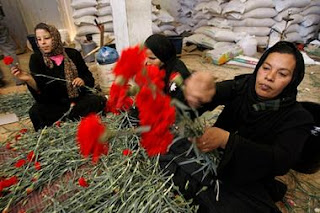 GAZA CITY – Flower farmers in the Gaza Strip exported a shipment of 30,000 flowers through an Israeli crossing on Thursday in a rare easing of the Gaza blockade that will see continued flower exports until the season ends in May of next year. This marks the first time since the 2006-07 season that Gaza’s flower growers, on a request local agricultural officials say was brought by the Netherlands to Israel’s Defense Ministry, will export their entire harvest of some 35 million roses, carnations, and chrysanthemums to markets in European countries.

It is also one of the only exceptions Israel has made for exports from the impoverished Palestinian territory. Israel imposed a tight economic blockade when the Islamist movement Hamas seized control in 2007.

Key European supplier
Gaza was one of Europe’s main flower suppliers before Israel halted commercial and agricultural exports from the territory. Gaza’s last shipment of flowers was a truckload of 25,000 stems symbolically allowed out for Valentine’s Day earlier this year.

Yusuf Shaath, the cash crops project manager for the Palestinian Agricultural Relief Committees (PARC), a local development organization that works closely with farmers, says the sector expects to earn $6.3 million with this year’s harvest, after a near-total collapse over the past two years.

“The farmers are very excited – they had lost totally their markets with the blockade,” says Mr. Shaath. “We won’t ask why the Israelis decided to lift the blockade for us, we’ll just do our work.”

Ideal soil for growing flowers
An Israeli official confirmed the shipment had been made, but would not elaborate on why the exception had been made. The next shipment of 250,000 flowers is slated for next week, local officials say.

There are more than 100 flower farms in Gaza, mainly in Rafah in the south and Beit Lahiya in the far north, that employ some 7,000 workers, according to the Palestinian Center for Human Rights (PCHR).

Gaza’s flowers will be transported from the Kerem Shalom crossing by Israeli exporters to the world’s premier flower auctions in Holland, Mr. Shaath says. From there, they will be sold to European distributors at an average of $0.20 a stem.

Ranked No. 3 in quality, flowers were fed to livestock due to blockade
Shaath says Gaza’s flowers, of which there are approximately 45 varieties, are ranked No. 3 by Dutch flower growers in terms of quality.

Unable to sell their entire harvests in local markets under the blockade, Gaza’s flower farmers fed the past two seasons of their crops to livestock.
Posted by GS Don Morris, Ph.D./Chana Givon at 4:24 PM