The Human Spirit: Letter to Swedish FM who wants to solve J'lem's problems 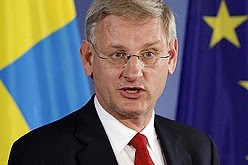 Shalom Mr. Carl Bildt,
As a Jerusalemite, I have been following your recent efforts as foreign minister of Sweden, and the representative of the country which is currently completing its presidency of the European Union, to make half of my hometown the capital of a Palestinian state. I recognize that you are a person who hails from Scandinavian nobility, that you served as Sweden's prime minister, and once attempted to resolve conflict as the high representative for Bosnia and Herzegovina. I'm certain that you mean well by trying to impose your own solution on our area while leaving a legacy for your time in office. Contrary to what you might believe, we Israelis have long accepted the idea of a Palestinian state alongside our Jewish one. Just ask our prime minister. We're an unusual city population with both high literacy rates and high birth rates - not nearly as muddled as you might think. In our thinking, we're not about to enter a complicated partnership by dispensing with negotiations. We don't think you do that in Sweden.

Before you cavalierly split our city, on your next journey to Jerusalem, take an excursion to the Tisch Family Biblical Zoo, the new posh Jerusalem Mall, the Bloomberg Mother and Child Center at Hadassah University Medical Center. You will discoverer that we Jews and Arabs live more integrated lives than you imagined. For example, during the recent Muslim Feast of the Sacrifice, I wanted to order an oversized halla for a Redemption of the First Born ceremony at my home. The mehadrin bake shop couldn't provide one because the chief halla baker was celebrating the Muslim holiday. How do you explain that in Swedish?

And with all due respect, how can you propose yourself as the appropriate broker for imposing a peace accord, either speaking for the EU or as a representative of Sweden, when you must know how we feel about Sweden? Yes, Sweden. Growing up Jewish, Sweden was never one of those "do-not-visit-or-buy products-from-countries-because-they-were-horrible-to-Jews," and I even had a childhood friend whose father made her return a handbag made in Spain because of the Spanish Inquisition, which took place in 1492! No one I knew ever refused to ride in a Saab or Volvo, or rename Swedish meatballs.

BUT THAT was then. The dark side of Swedish attitudes to Jews and Israel has grown more worrisome over the years. First, there were the revelations that despite the purported Swedish neutrality during the Holocaust, you sent iron ore for Nazi armaments. With the exception of Danish Jews, your rules barred desperate Jewish refugees. Sweden's notorious reluctance to bring Holocaust perpetrators to trial has been scored by Israeli Nazi hunter Efraim Zuroff.

In the last decades, anti-Israel demonstrations have elicited abusive language and violence. Wouldn't you think that a country so eager to dictate policy in Jerusalem should have been able to work out a way to hold an open Davis Cup match in Malmo, its third largest city? You're also the nation where a suicide bomber is in an art exhibit, and who remained silent over a Swedish journalist's blood libel accusing our sons of harvesting the internal organs of Palestinians.

Extensive evidence of the troubling Swedish attitude and behavior is documented in Behind the Humanitarian Mark, Nordic Countries, Israel and the Jews, edited by Manfred Gerstenfeld.

I recently had the pleasure of discussing Sweden and Israel with Paul Widen, a Swedish freelance journalist who has lived in Jerusalem for the last four years. Because he's Swedish, just about everyone he wants to interview initially assumes he's anti-Israel and either wants to give him a lecture or a pass. He has to overcome their resistance. That he's young, charming and speaks fluent Hebrew helps.

Widen, 32, actually provided a more optimistic view of Swedish-Israeli relations. "You shouldn't assume that Swedes harbor a sinister hatred of Israel," Widen says. "They don't. There are even strong supporters of Israel in Sweden. But Swedes, unlike Israelis, crave consensus; they have low tolerance for complex situations with built-in paradoxes. Even among those who support Israel, you'd be hard pressed to find some who would challenge popular assumptions that equate settlements with obstacles to peace or anyone who didn't automatically equate suffering with virtue. Questioning the authenticity of alleged suffering people is taboo for a Swedish journalist. For all their supposed openness, Israelis are harder for Swedish journalists to get to know than Palestinians.

"There are indeed journalists like Jan Guillou who support the armed struggle of the Palestinians, but they're the minority," insists Widen. "Most mean well but support rather than challenge common assumptions."

An important solution would be to make sure there is more nuanced coverage. Widen himself has begun filing stories for a fledgling channel called Fokus Israel. You may have missed it, because it is broadcast on the Gospel Channel. So far, sponsorship comes from a single, good-hearted Christian TV producer who feels bad about the unbalanced coverage Israel receives in Sweden.

Recently, when state-funded Swedish public TV ran a negative piece about rabbis' growing influence in the IDF, the reporter failed to get even one rabbi to go on the air. Widen, working on his own, used personal connections and ran a full interview. At the risk of sounding like a foreigner giving gratuitous advice to a local, I suggest you tune in.

Behind the Humanitarian Mark, Nordic Countries, Israel and the Jews, edited by Manfred Gerstenfeld is available on line at http://www.jcpa.org/text/nordic.pdf.
This article can also be read at http://www.jpost.com /servlet/Satellite?cid=1260447408416&pagename=JPArticle%2FShowFull
Posted by GS Don Morris, Ph.D./Chana Givon at 5:52 AM