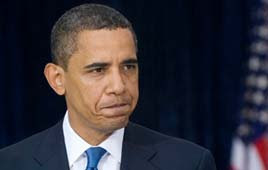 VIDEO - US President Barack Obama sent a special video message Tuesday to the opening session of the presidential conference entitled "Facing Tomorrow" being held in Jerusalem. Obama sent his regards to Prime Minister Benjamin Netanyahu and praised the "great statesman" President Shimon Peres, who, according to Obama, contributed immensely to strengthening ties between Israel and the United States.


Obama noted that Peres managed in his life to help build and ensure the existence of the State of Israel, to grapple with difficult challenges, and to drive towards peace.


"I'm especially honored to send my greetings to a great statesman, the host of this conference, President Shimon Peres. His life stands as an extraordinary example of how courage and perseverance can help shape the future and turn harrowing challenges into historic opportunities," said Obama. "Shimon has also contributed to a deep and much abiding friendship between the United States and Israel."

President Obama emphasized that the friendship between Washington and Jerusalem is a "bond that is much more than a strategic alliance."


"The American people and the Israeli people share a faith in the future, a belief that democracies can shape their own destiny and that opportunities should be available to all," stated Obama.


Obama mentioned some of the challenges facing the international community and said that he believes, as does Israel, that now is the time to act and that everyone needs to shoulder their part.


Obama pointed to the example of Israel that it is possible to overcome the impossible.


Peres: We said yes to immediate renewal of talks

The second presidential conference kicked off in Jerusalem under the title "Facing Tomorrow." Conference organizers claim that more than 3,500 people are expected to participate in the event over the course of three days.


The conference is taking place under the patronage of Shimon Peres, who spoke at the opening session, saying, "We have been through nine wars that have threatened our existence and we have won them all. Today, Israel is a strong and advanced country that wants to contribute, not just get by."


President Peres addressed the peace process in his speech: "Israel said yes to US President Barack Obama's initiative to renew negotiations immediately with the intention of forming two states for two people and to bring about comprehensive regional peace in order to snuff out the fire of hatred."


According to him, "Nations who have not been hurt by car bombs and rockets fired at civilian populations are not aware of the damage caused by terrorism and the price it claims."


Prime Minister Netanyahu said to Peres at the conference: "We meet a lot and it is no secret that I consult with you a lot. You have life experience that few in the world have."


Ambassador Rice: We will stand by your side

US Ambassador to the UN Susan Rice is among the many statesmen who have come to Jerusalem to attend the conference, including top international figures in the fields of economics, policy, and technology.

Prior to the kick off of the conference, Peres had a work meeting with Ambassador Rice. Peres' office reported that Rice reiterated to the president the United States' commitment to Israel's security and its existence as a Jewish and democratic state.


During their meeting, Peres attacked the Goldstone report saying that "it is an outrage that a respectable institution such as the UN has acted as a stage for a series of baseless, anti-Israel lies and stories."


According to Peres' office, Rice said in response that the US promise to stand by Israel's side as a loyal friend, also in its fight against the Goldstone report.

Comment: Before anyone gets too excited ask yourself why Obama made such a performance out of telling us how the USA still is a friend of Israel? Remember, you are dealing with a calculating politician-what is in it for him?
Posted by GS Don Morris, Ph.D./Chana Givon at 6:51 AM