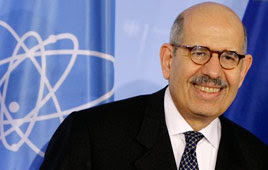 Direct talks without preconditions between the United States and Iran are the only solution to the conflict over Tehran's nuclear program, the UN nuclear agency's head was quoted as saying on Saturday. New sanctions against Iran would only aggravate the dispute rather than push it to give in to international demands, Mohamed ElBaradei, Director General of the International Atomic Energy Agency, told Austrian daily Die Presse.

"Of course you can impose further sanctions. But I consider it rather unlikely that new sanctions will make Iran come around," ElBaradei said in an interview to be published on Sunday.

"President Barack Obama has understood that talks with Iran are the only possible solution," the Nobel Peace laureate said. "If you want to make progress, you have to start talks without preconditions."

Iran won itself a reprieve from the threat of harsher UN sanctions by engaging six world powers in high-level talks on Oct. 1 in Geneva that opened the door to detente over its nuclear program after a seven-year standoff.

ElBaradei said he was optimistic that follow-up talks in Vienna next week to finalize an agreement with Iran on processing its uranium abroad could open the door to broader talks about Iran's nuclear program.

"With this first step to build trust we could make an important contribution to defuse the crisis," he said.
Posted by GS Don Morris, Ph.D./Chana Givon at 6:08 AM