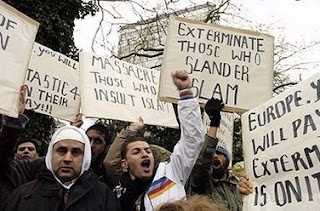 When America entered the war in Vietnam, Ho Chi Min said that it would be a long war and that the communists would win by using propaganda in the media and the universities. He was correct. It is time to take stock in the war between Israelis and the Palestinian (Arabs) and deal with some forbidden subjects. Israel is losing the propaganda war, hasbarah, and for a very good reason.

Why don't Jews and Israel want to deal with propaganda? Simple. It would mean talking about Islam. Jews and Israel must face the facts that the Koran and the Sunna (the actions and words of Mohammed) are filled with invectives against the Jews. At first the words were complimentary, but when the Jews of Medina rejected Mohammed as a prophet they were all enslaved, exiled, murdered and robbed -- all acts of jihad. These were not historical acts, but perfect examples of Islamic action towards Jews -- models prescribed for Muslims to follow up to the present time. To illustrate the severity of this predicament, statistically speaking, in the Koran of Medina 10.6% of the text is devoted to Jew hatred, whereas, only 6.8% of Mein Kampf is devoted to Jew hatred.

Yet, it seems until now that both Jews and Israel choose annihilation over talking about Islam. It is simply not an acceptable subject matter. Political correctness prevails over survival. Unfortunately, these are suicidal choices. It is obvious that the ADL and the Jewish Federations for example, are only two Jewish organizations that have corporate polices of not discussing Islamic political ideology.

The ADL will admit that there are a "few" radical Muslims, and would gladly argue in public that except for a few Muslim extremists, Islam is not the problem. ADL is the first to argue that Jews and Christians have their share of crazies and they are no different from the Muslims. This is the ultimate multiculturalist view, which may well lead to a disaster for Israel and aid in the demise of Western civilization.

Since a propaganda war is about the use of intelligence, one would think that the Israelis would be the world's best and the Muslims would be the worst. Look at Nobel prizes, especially in the sciences. Israelis win them by the handful compared to the Arab world. But in the hasbarah, public relations, the Israelis are lazy fools and the Palestinians are industrious geniuses.

Israeli government officials who will comment off the record say that as a government, Israel cannot launch a propaganda war over Islam.

And, if Israel were to launch an ideological war, who would be the target audience? The ultimate target would be the secular and liberal Jews of America and Israel, who are the near enemy. If you can launch a hasbarah campaign that would open their eyes, enough of the world would tag along.

Otherwise, if the Israelis continue to think that they can keep scoring military victories and by that win this ideological war, they are fools and worse. America won the Tet offensive on the battlefield, but lost the propaganda war in the media and the universities, exactly as Ho Chi Min predicted.

As a brilliant example of ideological war, revisit Netanyahu's UN speech on September 24, 2009. He laid out the civilizational differences between Holocaust deniers and Israel. The same arguments about civilization should apply to the war between the Palestinians and Jews in Israel. This is because the Israel/Palestinian conflict is no different than the jihad in Kashmir, India, the Philippines, or in dozens of fronts in Africa.

After the Mumbai terror attack, the Jewish community in Nashville, TN had a rally at a synagogue. They prayed for peace in Israel. The same day, Christian supporters of Israel held a rally, and they prayed for Israel's victory.

Now, which one of the two maintains a stronger position -- peace or victory? Today Israel desires peace and the Palestinian (Arabs) insist on victory. Guess who wins? Peace is for losers. Regrettably, Israelis and American Jews are choosing to be the losers. The consequences however are too dire; ultimately, Israel may get their peace, but it may be the peace after jihad's victory.

Ironically, Israelis and Jews abroad are not the only ones in a state of denial about Islamic politics; they just happen to be at the frontline. President Bush demonstrated after 9/11 that he too had no clue how to fight this Islamic ideological war. Instead of using military force against our enemies, he and his successor- President Obama should have declared ideological war against our true enemy-political Islam.

They seem to lose their war and so will Israel unless some tough questions are faced and actions are taken.
Bill Warner is Director, Center for the Study of Political Islam
http://www.americanthinker.com/2009/10/losing_israel_1.html
Posted by GS Don Morris, Ph.D./Chana Givon at 8:48 PM