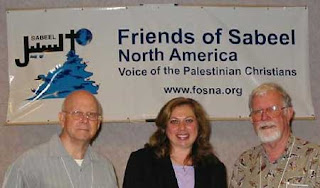 Like segregation and Apartheid, Jewish Israel needs to end altogether, Sabeel’s supporters seemed to insist. During a question and answer period after remarks by Richard Falk, the United Nations Special Rapporteur on Human Rights in the Palestinian Territories, an audience member urged people to ”vote the Jewish state out of existence”. Enthusiastic applause erupted up and down the pews. Seemingly no speaker disavowed the sentiment. Indeed, their remarks pointed in the same direction. (See Walton’s report here)

“If we are to re-imagine peace, we have to stop thinking of the conventional two-state solution,” Falk insisted. “This idea of two people living in separate states would be a disaster.” Jeff Halper of the Israeli Committee against House Demolitions heartily agreed. He and Falk want not only to end the “occupation” in the West Bank, but also to guarantee an unending “right of return” by descendants of Palestinians who lived in pre-1948 Israel, who would gain immediate Israeli citizenship and eventually eradicate Israel as Jewish state demographically, if not militarily.

To get there, Sabeel wants to demonize Israel as illegitimate. “We need to build a civil society resistance movement like against apartheid, that will make the occupation unsustainable,” Halper explained. “At this stage, it is a fundamental mistake to look towards intergovernmental diplomacy as a solution,” Falk warned. “Where we should look is towards mobilization and activation of civil society around the world.”

Falk emphasized: “It’s a grave error to think that international diplomacy can reach the goals of peace at this point.” Naturally, Halper agreed: “We’ve got to turn a corner and become a much more effective resistance movement,” he said. But Halper stressed: “Our job is to end the occupation, not [just] to end American involvement.”

Sabeel evidently is displeased with President Obama so far, with Falk complaining that his policies “are not that different” from President Bush’s. “The problem with Obama’s speech is that he refers to Israel as a Jewish state,” intoned Nadia Hijab of the Institute on Palestinian Studies, who claimed Israel’s Jewishness keeps Palestinians as second class citizens.

To jump-start global pressure against Israel, United Methodist missions official David Wildman urged anti-Israel economic pressure. (See Walton’s report here) “Boycott-Divestment-Sanctions is the cutting edge of how we in the international community can be in solidarity with Palestinians and Israelis working to end the occupation, working to end the apartheid practices of the Israeli government,” declared Wildman, Executive Secretary for Human Rights and Racial Justice with the New York-based United Methodist General Board of Global Ministries (GMGM). He evidently had forgotten that his own United Methodist Church rejected anti-Israel divestment last year.

“Boycotts do change bad behavior,” asserted Wildman, who unashamedly cited the Montgomery anti-segregation bus boycott as the exemplar. He called “racist” the supposed idea of “good violence” by colonizers, i.e. Israel, against “bad violence” by native resisters, such as Palestinians. “There are many brutal governments in the world, but these [alleged Gaza war crimes] were done with the consent of the governed,” Wildman angrily complained, referring to Israeli voters, and perhaps American ones too. “As a U.S. taxpayer, I’ve funded violent attacks – benefitted from a system of apartheid and oppression,” he regretted. The missions official also recalled boycotts against napalm producers during the Vietnam War and more recently against repressive Burma and Sudan as models for anti-Israel actions.

Presumably agreeing with Wildman, Rosemary Ruether opined: “This crime [Israeli occupation of the West Bank] has taken place with either the active or passive role of western Christianity.” Ruether, a long-time Roman Catholic dissident, is now Visiting Professor of Feminist Theology at the United Methodist-affiliated Claremont School of Theology. “One must stop using the Holocaust as though it mandates the creation of a state at the exclusion of its former occupants,” she declared. “A Jewish state is systematic discrimination because it’s based on identity,” said Ruether, who faulted a “subtle form of Christian Zionism” that “hands over all of the Middle East to Israel.”

Ruether further blamed “genocidal theologies” for pro-Israel stances by Christians. (See Walton’s report here) The Hebrew Scriptures suggest that indigenous people have a “demonic identity and that they should be exterminated for who they are,” she insisted. “Our confirmation of Israel’s identity myth justifies ours,” Ruether charged. “A God that justifies the removal of one group in the name of another is a racist, tribal God.”

Cherokee feminist and University of California professor Andrea Smith affirmed Ruether. “Genocide is foundational to the U.S. itself,” she claimed, also faulting “heteropatriarchy.” Smith was frustrated that, “Even on the left, we still see the presumption that the U.S. should and always will continue to exist, and then we don’t question the genocide that is foundational to the founding of the U.S.” While fellow leftists faulted President Bush for eroding civil liberties, Smith suggested he was actually “fulfilling” American democracy’s sordid premise.

Echoing Ruether and the Cherokee feminist, “Womanist” Theologian Bea Morris of Graduate Theological Union in Berkeley, California, likewise faulted the Hebrew Scriptures. “Some fundamentalist and Pentecostal denominations spend excess time in the Hebrew text and not very much in the Second [New] Testament,” she lamented.

So according to Sabeel, evidently here is the problem: Israel, and the Bible, are just too Jewish. Many Sabeel enthusiasts would like to dissolve one and rewrite the other. Their intemperate attempts will certainly fail.
Posted by GS Don Morris, Ph.D./Chana Givon at 1:55 PM