PA to tell Mitchell: No talks without settlement freeze 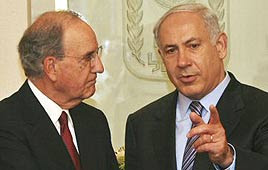 Special US envoy to Middle East scheduled to meet Netanyahu, Abbas Tuesday to discuss disputed issues, including Israeli settlement freeze, construction in east Jerusalem. Israeli official: Only after meetings will we know if Netanyahu-Abbas-Obama meeting will take place

Palestinian Authority officials are expected to tell special US envoy to the Middle East George Mitchell that the PA will not resume its negotiations with Israel unless the Jewish state commits to halting all construction in the West Bank. Mitchell, who has already met with President Shimon Peres during his current visit to the region, is scheduled to meet Prime Minister Benjamin Netanyahu Tuesday morning before heading to Ramallah for talks with Palestinian President Mahmoud Abbas.

Chief Palestinian negotiator Saeb Erekat said the Authority would not agree to anything less than a complete West Bank construction freeze in exchange for the relaunching of talks with Israel.

He also denied reports of a possible three-way meeting between Netanyahu, Abbas and US President Barack Obama ahead of the UN General Assembly session in New York.

The Palestinians hope Mitchell's visit will jumpstart the peace negotiations based on "an international understanding that the settlements pose an obstacle to peace."

The Palestinian cabinet on Monday called on Obama to continue pressuring Israel on the settlements, work towards bringing an end to the arrest of Palestinians within PA-ruled territory and demand that Israel lift its siege on Gaza, the Ma'an news agency reported.

Netanyahu, for his part, is expected to ask Mitchell to exclude east Jerusalem from the demand to halt settlement construction, and also expects the Americans and Palestinians to agree to the continuation of West Bank building projects that are already underway to accommodate natural growth.

"I told the Americans we would consider cutting down on construction. We shall balance the will to make a gesture in order to promote negotiations and a peace process, and the need to enable normal living for the residents of Judea and Samaria. Cutting down on construction will be for a limited period and we have not reached an agreement with the Americans on the time span," the PM told the Knesset's Foreign Affairs and Defense Committee Monday morning.
Advertisement


An official in Jerusalem said, "Only after Mitchell meets Abbas will we know whether the Netanyahu-Abbas-Obama meeting will take place and whether or not there is a real chance of resuming dialogue with the PA."

"We must begin building government institutions now, and not wait until after we declare a Palestinian state," he said.

Attila Somfalvi contributed to the report
Posted by GS Don Morris, Ph.D./Chana Givon at 7:13 AM