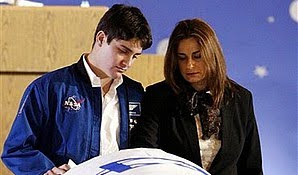 The funeral of Assaf Ramon, who died Sunday afternoon when his Israel Air Force F-16 crashed in the South Hebron Hills, will take place on Monday at 4 p.m. at the military cemetery in Nahalal. He will be buried next to his father, Ilan Ramon, who died in the Columbia space shuttle disaster six years ago. Prime Minister Binyamin Netanyahu postponed a meeting with US Mideast envoy George Mitchell until Tuesday in order to attend the funeral.

Ramon, 20, was promoted to the rank of captain after his death.

The cause of the accident was under investigation and was complicated by the extent of the crash scene, but an initial probe indicated that he blacked out during a sharp turn - possibly at 9 Gs - or experienced vertigo. A less likely possibility is that the plane may have had a mechanical failure that Ramon could not solve, but he was not able to report on his condition.

The debris was spread over a large piece of land near the Pnei Hever settlement, east of Hebron, military officials said.

Ilan Ramon, 48, became the first Israeli in space aboard the Columbia, which exploded during its reentry over Texas in 2003. Ramon was a colonel in the IAF and before joining NASA he held a number of staff positions at the branch's Tel Aviv headquarters.

Assaf Ramon announced his plans to follow in his father's footsteps shortly after the Columbia tragedy. In 2006, he enlisted in the IDF and successfully passed the grueling examinations and trials for the prestigious pilot's course. This past June, he graduated at the top of his class and was chosen as its valedictorian.

On Sunday, Assaf Ramon took off from the Nevatim Air Force base, southeast of Beersheba, in the early afternoon for dogfight training with another plane, flown by a veteran pilot.

The pair managed to practice three dogfights with the single-seater F-16As but then at about 1:45 p.m., as they were flying at around 19,000 feet, the lead pilot lost eye contact with Ramon's plane. He immediately contacted IAF Air Traffic Control, but Ramon's plane had already struck a mountain.

Several months ago, during a routine training flight in an A-4 Skyhawk, Ramon's engine suddenly died. Instead of ejecting, as protocol dictates, Ramon, together with the flight instructor, succeeded in restarting the engine and safely returning to base.

IAF commander Maj.-Gen. Ido Nehushtan immediately appointed an officer with the rank of colonel to investigate the accident. A large number of military personnel were deployed near the crash site to recover the remains and to study what had caused the accident. Sunday's flight was Ramon's 47th since graduating the pilot's course in June.

"This is a very difficult day for the IAF, especially considering that this is the second time the Ramon family has been struck by a tragedy," said Brig.-Gen. Yohanan Locker, deputy commander of the air force. "The Ramon family lost Ilan, the first Israeli astronaut, and his son Assaf - both exemplary officers and role models for many people in Israel."

The IAF scrambled several helicopters as well as teams from its Unit 669 heliborne medevac extraction force to the scene of the crash, which took almost an hour to locate. Magen David Adom and Israel Police teams also participated in the initial searches, when there was still hope that Ramon had ejected from the plane.

Based on preliminary findings, Ramon did not have time to report any failure and likely was also unable to eject. However, an eyewitness cited on Channel 10 said that a parachute was discovered among the debris, indicating that he may have tried to eject. The fall to the ground from 19,000 feet likely took a matter of seconds. Ramon had participated in a number of training exercises simulating such conditions.

The last fatal F-16 accident in the air force was in March 2000, when pilot Maj. Yonatan Begin, 30 - the grandson of former prime minister Menachem Begin and son of Minister-without-Portfolio Bennie Begin - and his navigator, Lt. Lior Harari, 23, crashed in the Mediterranean Sea, about 20 km. east of Atlit, at the end of a training mission.

Netanyahu issued a statement on Sunday evening saying the entire nation was "draped in sorrow over the death of Assaf, who fell from the skies, like his father Ilan, of blessed memory.

"This is a horrible tragedy for Rona and the entire Ramon family. It is a tragedy for the people of Israel. I was moved when Ilan, the youngest of the pilots who destroyed the death generator in Iraq, took with him into space a reminder of the destruction of the Holocaust," the prime minister said, referring to a tiny Torah that survived Bergen-Belsen that Ilan Ramon took with him on the ill-fated Columbia mission, and to the fact that in 1981, he took part in the bombing of Iraq's unfinished Osirak nuclear reactor.

"I was again moved deeply when Assaf continued in the path of his father and completed the pilot's course with distinction. The loss of one of these wonderful people, father and son, is a tragedy by itself. The loss of both brings with it unbearable pain. There is no consolation for Rona and the Ramon family, no consolation for the people of Israel. There are only tears."

President Shimon Peres had this to say:

"What happened today is more than a tragedy. In our worst nightmares we could never had imagined such a heart-breaking accident," Peres said in a statement.

He went on to praise both Assaf's father and Assaf himself.

"I knew them both, father and son - Ilan and Assaf, fighters, scholars, courageous men, dreamers… As a family they are a symbol for all that is great in Jewish history, all that is courageous in the Jewish state," the president said.

Herb Keinon and jpost.com staff contributed to this report.
This article can also be read at http://www.jpost.com /servlet/Satellite?cid=1251804563180&pagename=JPArticle%2FShowFull
Posted by GS Don Morris, Ph.D./Chana Givon at 6:56 AM