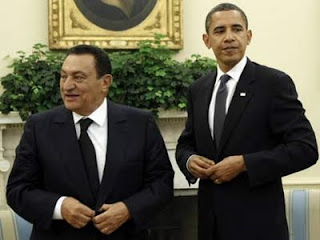 In Washington, Egyptian leader rejects notion of temporary Palestinian state, says 'we need to move to final status solution' based on return to pre-1967 borders

Egypt is expected to ask the US limit the Israeli-Palestinian peace process to two years, Palestinian sources told Ynet Tuesday night shortly after President Hosni Mubarak met his American counterpart Barack Obama at the White House. Obama told reporters at the White House that he saw encouraging signs of a softening of Israel's resistance to his call for a freeze on settlement-building in the West Bank.


"My hope is that we are going to see not just movement from the Israelis, but also from the Palestinians around issues of incitement and security, from Arab states that show their willingness to engage Israel," the US leader said.

Obama has been pushing Arab states to make small concessions to Israel to unlock deadlocked peace moves and has called on the Jewish state to halt expansion of settlements.

According to the Palestinian sources, for the future negotiations to be successful, all parties must agree that a comprehensive agreement would include a land swap and a return to the pre-1967 borders.


An agreement on the permanent borders, said the sources, would help resolve the remaining disputed issues, including the status of Jerusalem and the right of return for Palestinian refugees.


During the White House press conference, Mubarak rejected the notion of a temporary Palestinian state.

"We need to move to the final status solution and level," Mubarak told reporters as he sat with Obama in the Oval Office.

"I have contacted the Israelis and they said 'perhaps we can talk about a temporary solution,'" Mubarak said.
Advertisement

"We can reach a solution, because the Arab nation wants peace and a better life, and the Israeli people also want stability in their lives."

The Palestinian sources continued to say that Egypt would back Arab measures towards the normalization of ties with Israel should they be complimented by an Israeli halt to settlement construction.


"They key is the amount of pressure the US will exert on Israel," one source said, "The Arabs have made it clear that, in principle, they accept the formula of normalization in exchange for a settlement freeze, and now we must assess Israel's sincerity."


News agencies contributed to the report
Posted by GS Don Morris, Ph.D./Chana Givon at 9:28 AM