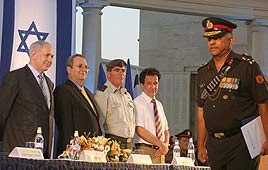 PM tells National Security Academy graduates 'radical Islam will be defeated by global information revolution, but this may be delayed by nuclear armament'; reiterates demand that future Palestinian state be demilitarized

"One day, the Palestinians will topple Hamas' rule in Gaza," Prime Minister Benjamin Netanyahu said Tuesday. "If the Palestinians could, they would overthrow Hamas, and believe me, one day they will," he said, speaking at the National Security Academy's graduation ceremony.

The prime minister also predicted that the end of radical Islam was near. "Eventually, radical Islam will be defeated by the global information revolution, the freedom to spread ideas and with the help of technology," he said.


"This won’t happen immediately, but it will happen. The only thing that could delay or disrupt radical Islam's demise is the possibility that (radicals) will obtain nuclear arms," he said.


Netanyahu also reiterated the importance of supporting the Palestinian economy, which he claimed will determine the Palestinians' future. "Economic development promotes peace. There is a struggle here and in other parts of the world against the dark, radical forces – the last thing these forces want to see is progress.


"The true test is whether we will be successful in helping the Palestinian Authority advance in the direction that Dubai has, or whether it will revert to the ways of the regime in Gaza. I am not saying (the PA) will become Dubai tomorrow or the day after that, but it is headed in that direction. The Palestinian economy is growing at an annual rate of more than 7%, and it can grow at a much faster pace," said the PM.


The Likud leader also repeated comments he made during his recent policy speech at Bar-Ilan University, saying a future Palestinian state must be demilitarized.


"No one wants to see a situation similar to the one in Gaza and south Lebanon, whereby any evacuated area is immediately taken over by terror elements," he said. "We all saw what happened in north and south Israel, and God forbid this should happen in central Israel as well. This is why the demand for active demilitarization is crucial to the peace process."


Earlier Tuesday, Netanyahu met with US special envoy to the Middle East George Mitchell in Jerusalem. The meeting was part of a round of talks being held by Mitchell and other top US administration officials in the region this week.


The Prime Minister's Office stated that the meeting was positive and that the two discussed various issues concerning the political process and not just the settlements issue.

Referring to Iran's nuclear program, Defense Minister Ehud Barak said after meeting US Defense Secretary Robert Gates on Monday that "we do not conceal our position. I believe that no option should be ruled out, and I recommend that others adopt the same approach."


The defense minister said that where the Iranian nuclear threat is concerned, Israel prefers to defend itself independently, "despite what (Gates) said about preference being given to diplomacy and sanctions at this stage."


Acknowledging Israel's concerns, Gates said the US administration's attempt to engage Iran was "not an open-ended offer" and that the US was aware Iran might try to "run out the clock."
Posted by GS Don Morris, Ph.D./Chana Givon at 12:21 AM