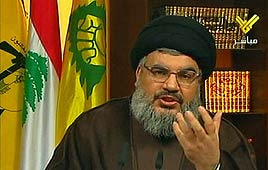 German daily 'Der Spiegel' is reporting that the United Nations investigation into the assassination of former Lebanese Prime Minister Rafik al-Hariri points to Hizbullah as the culprit. According to Der Spiegel the special UN tribunal has been in possession of the incriminating evidence for some time now but has so far elected to keep it from the public. Hariri was killed in 2005 when a bomb was detonated outside a Beirut hotel as his motorcade was passing by. Initial speculation centered heavily on Syria, whose grip on Lebanon Hariri vehemently opposed. Accusations were also hurled towards al-Qaeda, Iran and Israel.

An international investigation which began in 2005, and was authorized by the UN, concluded that Syrian forces working with Lebanese officials were behind the bombing. This led to the arrest of four suspects, but the investigative team failed to provide any concrete evidence that linked them to the assassination.

In March 2009 the UN formed a special tribunal to handle the investigation, headed by Canadian prosecutor Daniel Bellemare. This tribunal immediately ordered the release of the four men arrested in connection to the bombing.

According to Der Spiegel's sources, the tribunal's investigation has revealed that not Syria but Hizbullah is responsible. Furthermore, the sources say, Bellemare and the judges working with him have been aware of the new information for about one month, but so far have chosen not to disclose it to the public.

The breakthrough was made when Lebanese detectives managed to set apart the signals of several cell phones that were being used near Hariri's motorcade at the time of his murder. The paper says the detectives referred to these mobile phones as "the first circle of hell".

The detectives then tracked down the phones, which were all purchased on the same day in Tripoli and
Advertisement


disconnected immediately after the murder. They recognized the phones as the assassins' main form of communication.

The "second circle of hell", according to the detectives, was a network of around 20 mobile phones that contacted the first eight phones repeatedly. Lebanese security claims all of the phones belong to Hizbullah's task force.

Another major breakthrough came when one of the main players contacted his girlfriends from one of the phones in question, allowing the detectives to identify him.

According to the paper the investigators believe the amorous terrorist to be Abd al-Majid Ghamlush. The Hizbullah operative also purchased the mobile phones.

From Ghamlush the investigators were led to who they believe to be the mastermind of the attack - Hajj Salim. The latter reports directly to the organization's Secretary-General, Hassan Nasrallah. The paper cites Nasrallah's possible envy at Hariri's overwhelming popularity as the driving force behind the assassination.
Posted by GS Don Morris, Ph.D./Chana Givon at 7:09 AM