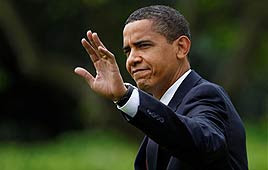 WASHINGTON - US President Barack Obama will not rush to press Prime Minister Benjamin Netanyahu in their upcoming meeting, a close associate of Special Mideast Envoy George Mitchell said Sunday. "No winning strategy begins with a punch in the nose," the source said, adding that Netanyahu can expect a "business-like meeting, highlighting the common" between the two countries.


Meanwhile, former Bush Administration official Elliott Abrams estimated that the first minute or two of Monday's meeting may determine the chemistry between both leaders.


"This isn't the first meeting between the two, but it is Netanyahu's first meeting as Israel's prime minister with Obama as president of the United States," he told journalists, adding that there are many issues on the agenda and that Netanyahu will aim to understand Obama's real attitude on the Israeli-Palestinian issue and to Iran.


Abrams noted that President Bush Jr. placed great emphasis on personal relations, yet it is too early to say how important such meetings are for Obama.


"It is unclear how important this specific meeting is for him" and whether it will change the way he conducts US Policy, Abrams said.


The former deputy national security advisor believes that even if both leaders fail to agree on diplomatic issues, it would be enough for them to agree on "pragmatic steps" that would enable President Obama to talk about progress during his speech in Egypt next month.

"That way he would be able to give George Mitchell something to work with in his next trip to the area," Abrams said.


Roni Sofer contributed to the report
Posted by GS Don Morris, Ph.D./Chana Givon at 6:34 AM