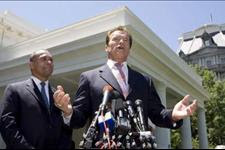 WASHINGTON -- California, the sunny incubator of America's future, has relished its role as a leading indicator of political trends. Tuesday it became what it thinks it should be, the center of attention, but not in the way it wants to be. Its voters, at last sensible, rejected, by an average of 65 percent, five of six propositions. Gov. Arnold Schwarzenegger, the "post-partisan" Republican, and the partisan Democrats who control the Legislature, promoted the propositions as efficient for and essential to eliminating the state's budget deficit, which will now be $21 billion. So California may become the next target for the Obama administration, whose dependency agenda involves seizing every opportunity to break things -- banks, insurance and automobile companies, etc. -- to the saddle of its supervision.

The Orange County Register -- if but one newspaper survives today's leveling winds, may it be this one -- made the case for rejecting all six propositions: 1A would have created an illusory spending cap that could be "easily circumvented by raising taxes" -- and the ballot language did not mention that 1A would have meant a $16 billion two-year extension of some of February's huge tax increases. Proposition 1B promised the public school lobby $9 billion, effectively bribing them to support 1A, which the California Teachers Association did. Proposition 1C combined "two of the worst practices responsible for" the state's dysfunction, "rosy revenue projections and borrowing": It would have authorized borrowing from (hypothetical) increases in state lottery revenues. Proposition 1D, "one more hide-the-pea fiscal deception," would have transferred to the general fund -- and much of it on to public employees -- revenues raised for children's programs. Proposition 1E would have done the same for revenues raised for mental health services.

Proposition 1F, passed by 73.9 percent, denies pay raises to legislators when the budget is not balanced. The Register opposed this because it gives legislators "a personal, financial incentive" to balance the budget by raising taxes.

Now California's mostly Democratic political class will petition Washington for a bailout to nourish the public sector that is suffocating the state's dwindling -- and departing -- private sector. The Obama administration, which rewarded the United Auto Workers by giving it considerable control over two companies it helped reduce to commercial rubble, will serve the interests of California's unionized public employees and others largely responsible for reducing the state to mendicancy.

These factions will flourish if the state becomes a federal poodle on a short leash held by the president. He might make aid conditional on the state doing things that California Democrats and their union allies would love to be "compelled" to do: eliminate the requirements of two-thirds majorities of both houses of the Legislature to raise taxes and pass budgets, and repeal Proposition 13, which voters passed in 1978 to limit property taxes. These changes would enable the Legislature (job approval: 14 percent) to siphon away an ever-larger share of taxpayers' wealth and transfer it to public employees. Such as prison guards, whose potent union is one reason California's cost-per-inmate (about $49,000) is twice the national average.

California's voters are complicit in their state's collapse. They elect and re-elect the legislators off whom public employees unions batten. Also, voters have promiscuously used their state's plebiscitary devices to control and fatten the budget. Last November, as the dark fiscal clouds lowered, they authorized $9.95 billion more in debt as a down payment on a perhaps $75 billion high-speed rail project linking San Francisco and Los Angeles -- a delight California cannot afford.

In a surreal attempt to terrify voters into supporting the propositions, Schwarzenegger (job approval: 33 percent) threatened to do something sensible: sell such state assets as San Quentin prison, which sits on prime ocean-view real estate. But Californians should now pay a real price, in realism about ways and means, for Schwarzenegger's wasted years. His governance-by-attention-deficit-disorder has involved flitting from one trendy irrelevance (e.g., stem cell research) to another (e.g., cooling the planet) while the state has sagged. Fittingly, he was in Washington as his shambolic legacy was being defined by Tuesday's defeat.

He was at the White House, applauding the Obama administration's imposition of severe fuel efficiency standards on a dependent automobile industry that at least has a proven aptitude for its new task of building cars Americans will not like. Standing far from Tuesday's repudiation, in the shadow of the president who may soon effectively be California's governor, Schwarzenegger was the administration's dependency agenda writ small.