Can Israel Still Be Saved? 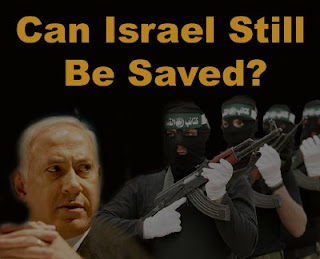 This week Israeli officials were in Cairo for talks with Hamas, mediated by Egytpian officials, on freeing kidnapped Israeli soldier Gilad Shalit for a number of Hamas terrorists generally put at 450. But with the talks having broken down, it appears the outgoing Olmert government won’t be able to claim a last “achievement.” Prime Minister Olmert’s office released a statement saying Hamas had “hardened its position, gone back on understandings that had been reached in the past year and raised extreme demands in spite of the attempts to advance the negotiations.” Reportedly, at the last minute Hamas rejected Israeli positions on dispersing the released terrorists to places other than the West Bank, and on keeping some of the most heinous terrorists—responsible for planning mass-casualty attacks and the like—out of the deal.

Hamas could, for reasons of psychological warfare, have been toying with the Israeli negotiators all along; or it could have decided that, with a presumably more hawkish Israeli government soon to take office, Shalit as a hostage in Gaza still provides valuable blackmail power; or that the longer it waits, it will eventually be able to extort the maximal deal from whichever Israeli government sits in Jerusalem.

But, whatever the reasons, it marks an ignominious end for a government trying to salvage something from three years of failures and fiascos and, specifically in this case, from its Gaza campaign that ended in mid-January. For the bitter fact is that at that time, the Israeli army had the upper hand in Gaza and presumably—especially given the many intelligence feats during the war—had access, or at least potential access, to Shalit.

Instead of pressing the advantage, though, Olmert, fearful of frictions with the incoming Obama administration, decided to end the war and withdraw the IDF. The short time since then has already seen the frittering away of the war’s achievements as both rocket attacks and arms smuggling have resumed.

On the Shalit issue, however, Olmert believed that Hamas—apprehensive of the incoming Netanyahu government—would also, for its part, be anxious to get the best deal still available. So Olmert set out to obtain, as a sort of last legacy, another of the grossly lopsided, severely harmful exchanges that various Israeli leaders have succumbed to over the past few decades.

Apart from the compassion that all loyal Israelis feel toward Shalit and his family, rationally speaking one has to be relieved that the attempt failed. Still, the overall picture left by the Olmert years is a bleak one.

In the security sphere, the Olmert government will go down in history with two important achievements to its name: the bombing of the Syrian nuclear reactor in September 2007 and (though Israel officially denies responsibility) the assassination of master-terrorist Imad Mughniyeh in Damascus in February 2008. Operation Cast Lead in Gaza may also, along with its squandered potentials, retain some lasting value in having demonstrated the IDF’s regained proficiency after Olmert sent it into Lebanon in summer 2006 under the unqualified, incompetent defense minister Amir Peretz, with abject results.

But the state of the Israeli security environment, after three years of this government, was illustrated by a recent report that Hezbollah in Lebanon and Hamas in Gaza now have a total of 50,000 rockets aimed at Israel. The former terror organization now has far more rockets than it had before the 2006 war, and the latter one is rapidly rebuilding its strength since Cast Lead and has already obtained Iranian Fajr-4 rockets—Hamas’s longest-range model yet, capable of reaching Tel Aviv and Israel’s nuclear reactor at Dimona.

As for the West Bank-based Palestinian Authority, Olmert has issued a final lament that the supposed peace talks with Mahmoud Abbas and other Fatah leaders failed because of, as he put it, “the Palestinian leaders’ weakness, lack of will and lack of courage in reaching an agreement.” What he left out, however, is that these leaders’ problems regarding “peace” go much deeper; he could have mentioned, for instance, a one-hour celebration on official PA TV this month of the 1978 Coastal Road Massacre in which Palestinian terrorists incinerated and otherwise killed 38 Israeli civilians.

What Olmert left out, in other words, is what he and his foreign minister Tzipi Livni have persistently omitted throughout the tenure of his government: that the West Bank Palestinian Authority is also, like Gaza, a hothouse of anti-Israeli hatred and is relatively kept in check only because, unlike Gaza, the Israeli security forces have reasserted a strong presence there. With their whitewashing and indeed glorification of the PA and its leaders as ripe, or close to ripe, for peaceful statehood, Olmert and Livni have further burdened Israel by reinforcing Western delusion and helping make the demand for a Palestinian state—however detached from reality and prudence—all the more strident and reflexive.

Add, then, the ongoing Iranian nuclearization, and the perennial Syrian hostility, to the Hamas threat, the Hezbollah threat, the Shalit captivity, and the pressures for capitulations to the Palestinian Authority, and the reality the new Israeli government will inherit is grim. At present prime minister-designate Netanyahu—still fearful of confronting that reality with a narrow right-wing government that will be an axiomatic whipping-boy both for the Israeli Center-Left opposition and internationally—is making a last-ditch effort to get Ehud Barak and his Labor Party to join his coalition even though Labor was itself part of Olmert’s problematic crew.

Apart from specific blunders like initially appointing an incompetent defense minister, or reacting impulsively to both Hezbollah and Hamas provocations without formulating clear goals or planning for contingencies, the Olmert government’s record of failure stems from a belief, now prevalent in the Israeli elite, that fighting—or at least defeating—one’s enemies is passé and instead Israel can rely on a benign and impartial Western world to extricate it from its problems. Thanks to the depredations wrought by this mindset over the past 16 years, the real nature of what faces the new Netanyahu government is that of a rescue mission—against, unfortunately, considerable odds.
P. David Hornik is a freelance writer and translator living in Tel Aviv. He blogs at http://pdavidhornik.typepad.com/. He can be reached at pdavidh2001@yahoo.com.
Posted by GS Don Morris, Ph.D./Chana Givon at 7:15 AM