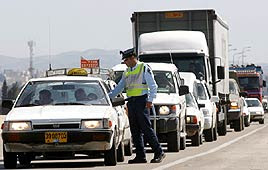 Police raised their alert level in the Tel Aviv metropolitan area following a warning. Roadblocks were set up in the entrances to and exits from Tel Aviv, causing traffic jams. Police arrested illegal workers in the Geha Road area and detained Palestinians with stay permits for questioning. Palestinians were also detained near Tel Aviv's central bus station.


At first the police blocked traffic to the city completely, but for fear of heavy traffic jams they decided to selectively check the entering vehicles.


Recently, a source in the al-Quds Brigades, the Islamic Jihad's military wing, threatened to resume suicide bombings in Israel.


"The past few months have made the Israelis forget the suicide attacks," the man told Ynet, "and if they think the fence in the Gaza Strip or in the West Bank will prevent the attacks, we promise we have ways to remind the Israelis that the attacks will return to the heart of Israel and that the killing will not only take place in the Strip."


Sources in the Palestinian Authority hinted recently that Hamas was interested in escalating the situation in order to affect the election results in Israel.