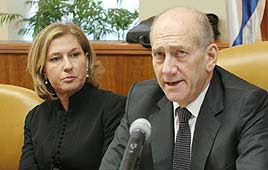 Prime Minister Ehud Olmert, Foreign Minister Tzipi Livni and Defense Minister Ehud Barak convened Wednesday to discuss the alternatives for an Israeli response to the ongoing rocket fire from Gaza. . Shas chairman, Minister Eli Yishai called on the leaders ahead of the meeting to order "immediate pinpoint operations against the Hamas leadership and those who carry out the terror attacks against Israel."

Yishai added that Israel should impose an economic blockade on the Strip by halting all money transfers to Gaza. He also urged other sanctions, such as the sealing of border crossings, and damaging the electricity, gas and water infrastructure in the area.

"I know of no legal opinion that prevents the decision-makers from responding to the firing of Qassams, Grad missiles and mortar shells at civilians," he stated. "The legal argument shouldn't be used as an excuse for Israeli non-action," he added.

Interior Minister Meir Sheetrit stated that it was time to stop discussing the fortifying of Israeli communities. "For years we have been saying that the best defense is offense. I want people in Gaza to fortify themselves, not people in Israel."

According to Sheetrit, "Hamas' missile range could threaten half a million people. No one is suggesting that we fortify Ashkelon and Ashdod. Therefore the no-response approach to rocket attacks must stop."

Housing and Construction Minister Zeev Boim said that "there's a need for a wide-scale military operation in any scope necessary. It's no secret that the entire country is under rocket threat."


Livni, who called the meeting, is demanding an Israeli response to every rocket or shell fired from Gaza. "Fire must be answered with fire," she said.

"I don't care what the return address on the missile is, as far as I'm concerned Hamas is responsible for all artillery fired from Gaza."
Posted by GS Don Morris, Ph.D./Chana Givon at 12:48 PM