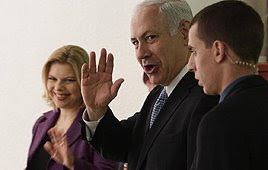 Nearly 100,000 registered Likud members given opportunity to select party's new roster. Amid malfunctions in computeirzed system, hardliner Feiglin says 'someone may not be able to resist temptation and try tampering with the results'
Amnon Meranda

With the party's prospects to win the next elections looking good, the Likud's 99,000 registered members were given the opportunity to elect its Knesset roster Monday. . Polling stations opened at 10 am at 90 locations nationwide and will remain open until 11 pm. The voter turnout rate is estimated be somewhere in the 50%-60% range. Likud voters will be casting their ballots through a computerized system, in the hopes of averting the computer fiasco in the Labor primaries last week.


Malfunctions were reported in the computerized voting stations in Bet Shemesh and Mevaseret Zion, which are in the greater Jerusalem area.

The glitches were traced back to damaged Bezeq lines in Jerusalem, which were accidentally torn by a tractor on Monday morning. Voting at the Jerusalem station, which includes 20 polling stands, was postponed by an hour an a half due to the problem.

Voting in Jerusalem resumed once the malfunction at the International Convention Center polling station was repaired.

Likud hardliner Moshe Feiglin was one of the first to cast their ballot, amid expressed concerns of election tampering: "I have my concerns that when the system is computerized and unsupervised, someone may not be able to resist temptation and try tampering with the results," he said.

Feiglin further added that Monday's primaries would determine whether the next Knesset will see the Likud become "the pullout's Likud, Kadima's Likud or the real Likud, which will bring back the love for the land of Israel and the Torah. Do we continue on the path of destruction led by (former Prime Minister Ariel) Sharon and by the Left, or do we embark on a new path."

Feiglin rebuffed claims suggesting his hard-line positions could prove detrimental to the party, saying "my induction in the Likud has opened it gates to the entire national camp."

Soon after, Likud Chairman Benjamin Netanyahu and his wife Sara cast their vote. Netanyahu took his time behind screen and upon coming out said that "we have a lot of excellent candidates. I had to give it serious thought which is why I took my time.

"I believe we are voting for the country's new leadership today, one which can solve the security and financial problems. We are blessed with excellent people," he told Ynet.

Next to vote was former Minister Dan Meridor. "I hope that all the party members will vote by tonight. There is a very good chance we are choosing the next leadership."

As for the statement made against him by his peers in the Likud, suggesting he was the party left-wing marker, Meridor said that he "was first inducted into the Likud 40 years ago. I was privileged to sit with (former Prime Ministers) Menchem Begin and Yitzhak Shamir. I am the one who represents the true Likud."

About one hour prior to the vote, Tel Aviv District Court President Uri Goren ordered the Likud to refrain from publishing the results for the party's 26th slot, which has been secured for a non-Jewish candidate.

The decision was made following a petition filed Likud member Rahed Hir a-Din, who claimed that the fact that that party allowed former Knesset Member Ayoob Kara to bid for the slot, was hindering other candidates' chances.

The court order the Likud to hold the results pending a decision on the legality of the relevant clause in the party's codex. Judge Goren also found the party in contempt of court, since it failed to send a representative to the hearing, and fined it NIS 10,000 (about $2,530).

Three main battles will be at the center of attention during the primaries:

* A battle for Likud's image, pitting Chairman Benjamin Netanyahu against hardliner Moshe Feiglin.
* A battle pitting Likud's new "stars" who recently joined the party against incumbent Knesset members.
* An ethnic battle over the number of Sephardic candidates to win realistic spots on the roster.

Netanyahu seeks to present a balanced and centrist roster in the hopes of averting attacks on the part of Labor and Kadima. The Likud leader is therefore concerned about a strong showing by Feiglin's camp, and in recent weeks initiated several moves in a bid to undermine candidates associated with his bitter rival.

Among other maneuvers, Bibi threatened that candidates who form political alliances with Feiglin's camp will not be serving in a future Likud-led government.


At this time it also appears that the top 20 spots on the roster will likely be won by Ashkenazi candidates, prompting Likud's "field activists" to promote more Sephardic candidates in the vote. Despite reports of "Sephardic deals" to that effect, it is unclear whether these constitute significant alliances or minor agreements.

Chairman Netanyahu is also concerned that candidates perceived as moderate, such as Dan meridor and Uzi Dayan, will not do well in the primaries. A failure by some of Likud's new additions to win realistic spots would also undermine Netanyahu's image.


According to Likud polls, Begin is expected to win the top spot in Monday's primaries, with MK Gideon Sa'ar and former Foreign Minister Silvan Shalom expected to battle for second place. Recent polls indicate that Shalom enjoys a small lead for the time being. Yaalon is also considered a favorite and is expected to secure a top spot.