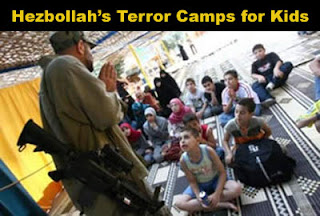 A new report by the Intelligence and Terrorism Information Center (ITIC) looks at Hezbollah’s annual summer camps for Shiite teenagers and children in southern Lebanon.


The kids—tens of thousands strong—come from Hezbollah’s Imam al-Mahdi Scouts movement and other youth groups. An earlier ITIC report noted that the Imam al-Mahdi Scouts received a permit from the Lebanese Education Ministry back in 1992; yet calendars distributed by the organization that were captured by the Israeli army in the summer 2006 war gave short shrift to Lebanese identity.
The summer camps, along with the regular activities of such places, are centers for inculcating kids with Iranian radical Islamic ideology, anti-Israeli hatred, the personality cult of Hezbollah leader Hassan Nasrallah, and the glorification of Hezbollah “martyrs” like Abbas Mussawi (Nasrallah’s predecessor, assassinated by Israel in 1992) and master terrorist Imad Mughniyah (assassinated last February with no one taking credit and Hezbollah blaming Israel).


One youth group with a summer camp of its own, Al-Shabab, is for children under the age of 10. Last August 21 Al-Akhbar, a Hezbollah-affiliated Lebanese newspaper, reported that Al-Shabab was founded in 2000 in villages near the Israeli border and that Hezbollah has a massive presence in those villages. The camp itself is in a Hezbollah compound south of the Litani River.


According to UN Security Council Resolution 1701, on whose basis the 2006 war was ended before Israel had time to beat Hezbollah, it was precisely the area between the border and the Litani that was supposed to remain “free of any [forces] other than those of the Government of Lebanon and of UNIFIL….”


How do the Al-Shabab kids spend their time at the camp? Along with normal fare of sports and entertainment, the Al-Akhbar reporter saw a Hezbollah operative (dubbed a “resistance officer”) walking among the kids in military uniform and gear including an M-16 rifle slung over his shoulder (see the first page of the above-linked report). The operative preached to the kids about Israel as “an absolute evil and enemy” and fired questions to them about Israel’s “ideology” and “aggression.” He then treated them to a Hezbollah-produced film, The Victory Generation.


This opus appears to be a classic case of projection: it purports to show Israeli children training with weapons from the age of five as part of the “culture of hatred and murder they absorb, in order to send gift rockets to Lebanon [during the summer 2006 war].”


As the ITIC notes, “by demonizing Israel and portraying it as the root of all evil, Hezbollah seeks to…motivate [children and teenagers] to take part in the violent struggle for its elimination.”


The implications for Israel are grim but worth taking note of.


1. The camps are stark evidence that Hezbollah’s threat to Israel goes beyond terrorism and warfare in the present and encompasses turning Lebanon, or a significant part of it, into an actively hostile country for generations to come. The Shiites, among whom Hezbollah carries out its indoctrination and cultivates its future cadres, may already constitute half the population as the generally better-educated Christian and Sunni communities emigrate in considerable numbers.


2. Nevertheless, Lebanon as a state is fully complicitous with Hezbollah even though Hezbollah’s real allegiance—as in the small above-noted example of the captured calendars—is clearly not to Lebanon but rather to Iran and its program of global Shiite revolution. That as far back as 1992, when Hezbollah’s political and military power in Lebanon was still considerably less than today, the Lebanese Education Ministry gave approval for a youth organization like the Imam al-Mahdi Scouts is, again, a small illustration of the fact that Lebanon has been harboring Hezbollah all along and allowing it to grow.


3. Israel now stands alone against Hezbollah and should have no further illusions that it has any allies in trying to check its power. The upshot of the international community’s supposed concern about the situation, as formalized most recently in Resolution 1701, is a situation where Hezbollah has not only fully reestablished its military presence between the Litani and the border but is free to run Hitler-Jugend-type camps there with no interference from the largely-European UNIFIL force let alone the Lebanese army.


4. Although Israel, as a cautious, conflict-averse democracy, is not likely to initiate preemptive action against Hezbollah at least in the near future, in the case of a broader conflict with the Iranian-led axis it would be wise to use the opportunity to act decisively against Hezbollah—and, as much as necessary, Lebanon—as it failed to do in 2006.