Sarkozy: "Move Jews Out of Judea and Samaria" 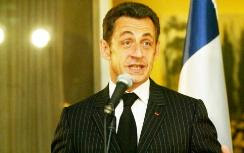 French President Nicolas Sarkozy asked the Knesset on Monday to recognize that "France will always be Israel's friend" - and promptly called for the division of Jerusalem and for the expulsion of the Jews from Judea and Samaria.

Speaking in French from the Knesset podium at a special session held in his honor, Sarkozy said, "Israel will always be every Jewish person's sanctuary. It is the only place where Jews will always be safe." He also called on the Palestinians to stop terrorism against Israel.Having received a red-carpet welcome from the Israeli government, Sarkozy vowed, "France will always be Israel's friend and will always stand in the way of those calling to destroy it."

Stop Construction, Deport Jews, Divide Jerusalem
He emphasized, however, that there will never be peace in the Middle East until Israel stops building in Judea and Samaria, and said that the Knesset should pass a law to compensate and deport all the Jews currently living there.

Sarkozy further said that Jerusalem must be divided into two capitals, including one for a future Palestinian state.

The speech was the first by a French president in the Knesset since Francois Mitterrand addressed the plenum in 1982.

Responses
In response, Knesset Speaker Dalia Itzik warned that terror has no boundaries, and that both Iranian nuclear power and Islamist terrorism "will reach Paris after Jerusalem and Tel Aviv."

Prime Minister Ehud Olmert, in his greetings to the French president, said, "We thank you for your courage, for your principles and for your friendship. On behalf of the Israeli people and the State of Israel, I salute you… Israel is now hoping for just one more miracle – the miracle of peace. We believe it will come."

Opposition leader and Likud party chairman MK Binyamin Netanyahu said, in his address at the session, that "Israel will never cede the Golan Heights and will never agree to divide Jerusalem."

Arab MKs jeered the Likud lawmaker as he addressed the Knesset, forcing the Speaker to threaten the hecklers that she would expel them from the legislative chamber if they continued to interrupt the speech. "This is very unpleasant," she rebuked them.

Orlev: French President Needs Lessons in History, Geography
MK Zevulun Orlev, Chairman of the National Religious Party, said afterwards, "Sarkozy should stay here a bit longer in order to learn some history, namely, that Jerusalem never beloned to Islam, but only to the Jews. He should also take a geography lesson, and visit Sderot and the transient camps of the Gush Katif expellees before he proposes another [Jewish] expulsion and retreat to the 1967 borders."

"His friendship with Israel must be based on those two lessons," Orlev said.

MK Benny Elon (National Union) said he agrees that there should be two states, but with slight differences than Sarkozy's proposal: "One state should be Jordan, on the east bank of the Jordan River, and Israel on the west side. No other state should be established between them. If Sarkozy agrees with me about these borders, we'll be able to come to an agreement on the rest."

MK Ruby Rivlin (Likud) said, "Dividing Jerusalem into two entities will not bring peace, but will rather eternalize the conflict - and the settlements are not an obstacle to peace, but rather that which helped give the Jewish People a permanent presence in its land."

Prime Minister Olmert's spokesman Mark Regev said that diplomatic talks between France and Israel will focus on Iran's nuclear program and on the newly-revived Israeli-Syrian peace talks. Olmert initiated resumption of indirect talks with Syria through Turkish mediators in Ankara several weeks ago. Arab media report that he allowed the issue of ceding the Golan Heights to be placed on the negotiating table.

On July 13, Sarkozy will host a conference in Paris where he hopes to bring together Prime Minister Olmert and Syrian President Bashar Assad.
Posted by GS Don Morris, Ph.D./Chana Givon at 4:14 PM