'Barak Has Spit in the Face of the Israeli Public' 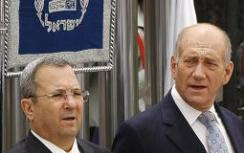 Senior members of the Labor and Kadima parties reached a last-minute agreement early Wednesday morning to scuttle a Knesset vote to dissolve the parliament and hold early elections.

The agreement, which came at the conclusion of a marathon negotiation between secretary-general of the Labor Party Eitan Cabel and Chairman of the Foreign Affairs and Defense Committee Tzachi Hanegbi (Kadima), calls for the Kadima Party to begin a process to hold primaries to replace party chief Ehud Olmert by September 25. In return, Labor agreed to oppose the no-confidence motion scheduled for Wednesday afternoon and any other bill to disband the Knesset in the immediate future. The Labor-Kadima agreement does not specify when Olmert will actually step down from office, under the assumption that the primaries will produce another paty leader.

Politicians from the right and the left were quick to slam the deal. MK Zahava Gal-On (Meretz) criticized the Labor Party for allowing a prime minister under investigation of corruption charges to remain in power several additional months instead of replacing him with a "suitable" government immediately. One Likud Party spokesman said Labor chairman Ehud Barak "once again failed to take responsibility," a reference to the Defense Minister's broken promise to resign upon publication of the Winograd Report in January, 2008.

MK Zevulun Orlev (NRP- NU), a co-author of the no-confidence motion that would have brought about general elections, said Barak has "spit in the face of the Israeli public."

Tzachi Hanegbi told the Hebrew-language website Ynet, "Both sides understood that (cross-party) squabbling does not serve their interests, nor those of the country. This agreement allows both sides to maintain their dignity – Labor got the prime minister to agree on a date for Kadima Party primaries. It's clear that no one is stalling for time here."
Posted by GS Don Morris, Ph.D./Chana Givon at 5:14 PM