Statement of the Islamist party calls on the PA to end security coordination with Israel, end negotiations. 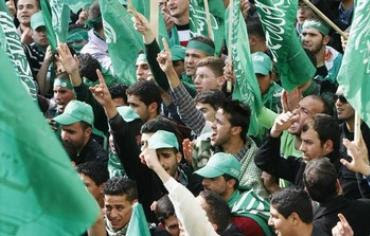 In an official statement released by Spokesperson Fawzi Barhoum, Hamas said Netanyahu's move to end the cooperation  with the Palestinian Authority obligated Abbas to allow the "unleashing of resistance, in order to deter the Israeli occupier and to defend our people, our land and our holy sites."
The Hamas statement called on the Palestinian Authority to end the peace negotiations, to end security coordination with the "occupation," and to embark on an international and regional campaign to delegitimize it.
"Netanyahu's move today proves that there is not place for the negotiations and there is a danger to continue them under any pretense," the statement read.
Abbas was expected to appeal at an Arab League meeting in Cairo on Wednesday for political and economic support in the event of Israeli punitive measures against the Palestinian Authority.
Barhoum called on all Arab countries to take moves to deter Israel and to stand by the Palestinian people and support the resistance against Israel.
Posted by GS Don Morris, Ph.D./Chana Givon at 7:26 PM