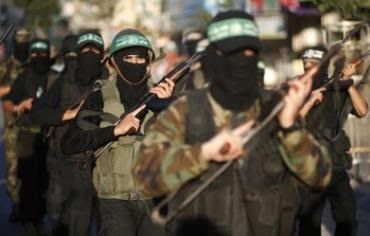 Palestinian members of Hamas's al-Qassam brigades. Photo: REUTERS
It was the largest Gazan rocket offensive on civilians in the South since the days leading up to November 2012’s Operation Pillar of Defense.

Islamic Jihad fired at least 70 rockets nearly simultaneously from points along the Gaza Strip, eight of which exploded in built-up areas. Thankfully, none caused injuries.

Defense Minister Moshe Ya’alon warned that the IDF would cause Islamic Jihad “to regret the attacks they carried out.” And he held Hamas responsible for the attacks as well. Foreign Minister Avigdor Liberman, meanwhile, warned that Israel might have no choice but to recapture Gaza.

It is hard to escape the feeling that we have been here and done this before. Terrorist groups based in Gaza fire rockets and we react with overwhelming military force. Are we entering into another round of escalation in the South? Or will our political leadership try a solution other than the well-rehearsed military option? The consensus among IDF intelligence officials seems to be that Islamic Jihad is taking advantage of Hamas’s weakness and trying to drag a reluctant Hamas into a clash with Israel. But Hamas’s very weakness might present Israel with non-military options that did not exist before.

Hamas has suffered a number of setbacks. The outbreak of the Syrian civil war was the first blow. Hamas’s ideological affiliate the Muslim Brotherhood is fighting alongside the rebels against Basher Assad’s forces. This puts Hamas in conflict with Iran, Assad’s biggest patron.

Hamas was forced to close down its operations in Syria.

The next blow was the fall of the Muslim Brotherhood in Egypt. The Egyptian military junta’s 2013 coupe d’etat, against the Muslim Brotherhood government headed by Mohamed Morsi led to a deterioration of relations with Hamas. The present Egypt government has cracked down on smugglers’ tunnels connecting Sinai to Gaza, which were the Strip’s most important conduit for goods, people and arms. And senior Egyptian government officials have predicted that their country will eventually carry out a military operation to topple the Hamas government in Gaza. Egypt accuses Hamas of taking part in attacks by Islamists operating in the Sinai Peninsula against police and military forces.

One option might be to form an informal, even clandestine, coalition with Egypt, the US and Fatah and topple the Hamas government, not solely or even principally via military means. A number of non-military methods could be used to bring down Hamas: continuing to crack down on smugglers’ tunnels belonging to Hamas; putting pressure on Qatar to withhold aid from the Muslim Brotherhood and Hamas (just this month the United Arab Emirates and Bahrain withdrew their ambassadors from Qatar in protest against its role in funding the Muslim Brotherhood); and bringing about the diplomatic isolation of Hamas.

Another option, supported by Shlomo Brom, head of the program on Israeli-Palestinian relations at the Institute for National Security Studies in Tel Aviv, is to encourage Hamas to continue to reposition itself as a legitimate political party, a process that began after Hamas took over the Gaza Strip in 2007. Hamas could then be co-opted for a larger peace agreement that includes Israel and Fatah. Palestinian support for such a move would undoubtedly be high: reconciliation between Fatah and Hamas has long been a consensus position among a large majority of Palestinians.

In December, a number of PLO members called on Hamas to break ties with the Muslim Brotherhood and become a solely Palestinian movement.

Whatever option the government ultimately chooses, Hamas’s weakened position presents opportunities that extend beyond a solely military solution to the rocket and mortar attacks emanating from Gaza Strip. Let us hope our political leaders will explore them.
Posted by GS Don Morris, Ph.D./Chana Givon at 4:26 PM