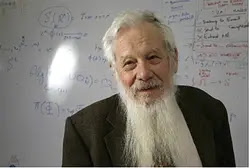 Professor Yisrael Aumann
Flash 90
The Executive Committee of the University of Haifa has refused to award an honorary doctorate to Professor Israel (Robert) Aumann due to his pro-Israel politics, Ha'aretz reported Sunday.
Professor Aumann won the Nobel Memorial Prize for Economics in 2005 for his work on conflict and cooperation through game theory analysis. However, despite his intellectual prowess - he is a noted professor from the Center of Rationality at Israel's top-level Hebrew University of Jerusalem, he is a visiting professor at Stony Brook University, and is one of the founders of the Center for Game Theory and Economics there - the University has decided to reject the Professor for political reasons.
At a hearing to discuss the candidacy last week, the director, Ami Ayalon, agreed with other board members not to award the title, citing concerns that "the Professor's politics are not in line with the University's values."
Among the board's concerns were remarks by Aumann in 2010 stating that "the most sensible solution" to the Israeli-Arab conflict is "a Jewish state and an Arab state, where the Jewish state is settled by Jews and the Arab state is settled by Arabs."

Aumann also insisted on other religious-Zionist principles, including that "Jerusalem needs to remain Jewish" and citing the importance of religiosity in maintaining a Jewish state. Aumann has reiterated these principles several times before, stressing the importance of maintaining Israel's Jewish heritage.
Adi Arbel, a colleague of the Professor and Projects Manager of the Institute for Zionist Strategies, responded to the move with force. "There is no doubt that for the Nobel Laureate, Professor Israel Aumann, this does not make any difference," he noted.
However, he emphasized that "the illegitimate phenomenon raises questions about how decisions in the past, present and future will be made" and notes that the current board "will be subject to less respect" as a result.
The University of Haifa, for its part, claims that the decision is not yet final. "The selection process for candidates for honorary doctorate is the process has several steps, which only ended up being published with the names of recipients and the reasons [behind the candidacy]," it stated. "The process is not yet over, and discussions along the way are internal and are not for publication."
The University has been the site of anti-Israel activity before. In 2012, during Operation Pillar of Defense, Arab students demonstrated in mourning not of IDF soldiers, but for downed terrorist Ahmed Jabari. The university later made a public statement against the incident and banned further student demonstrations.
Earlier this year, terror victims' advocacy organization Almagor publicly spoke out against the university for providing legal aid to convicted terrorists and murderers.