Paper's editorial board warns that while interim deal delays progress toward bomb, text on comprehensive deal makes many concessions. 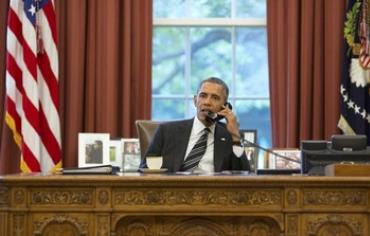 US President Barack Obama Photo: REUTERS/Pete Souza/The White House/Handout via Reu
The White House is omitting key facts about the nuclear deal signed with Iran, which makes a number of important concessions to the Islamic Republic, The Washington Post argued in its editorial Friday.

Sunday’s accord is a six-month agreement with an option to extend, meant to limit the Iranian nuclear program as the P5+1 – the US, UK, Russia, China, France and Germany – try to hammer out a comprehensive accord with Iran. In return, Iran received some sanctions relief.

While Iran has agreed to cap uranium enrichment and delay completion of the Arak heavy-water reactor during the interim, six-month negotiation period, the text of the deal says that the final agreement will involve "a mutually defined enrichment program with mutually agreed parameters.”

In other words, according to the Post's Editorial Board, "the United States and its partners have already agreed that Iranian enrichment activity will continue indefinitely. In contrast, a long-standing US demand that an underground enrichment facility be closed is not mentioned."
According to the editorial, the most troubling aspect of the Geneva interim deal is that it provides for a "sunset clause" in the comprehensive agreement, meaning even the long-term deal would not be finite, and Iran could return to uranium enrichment and plutonium production at some point in the future after sanctions have been removed.
How "long-term" the final agreement will be is a point of contention, with Iran proposing a period as short as 3-5 years before it is able to have an "unrestricted nuclear program."
The Post argues that the interim agreement is positive, because it delays Iran's progress toward a nuclear weapon without military action. However, the paper warns that the final agreement must be negotiated carefully.
"The concessions made to Iran will have to be balanced by a major rollback of Iran’s nuclear infrastructure — with no automatic expiration date."
Prime Minister Binyamin Netanyahu said Monday that he had agreed with US President Barack Obama to send an Israeli team headed by National Security Adviser Yossi Cohen to the US to discuss the comprehensive agreement with Iran.
The permanent agreement, Netanyahu said, must lead to one result: “The dismantling of Iran’s military nuclear capability.”
“I would be happy if I could join those voices around the world that are praising the Geneva agreement,” Netanyahu said. “It is true that the international pressure which we applied was partly successful and has led to a better result than what was originally planned, but this is still a bad deal. It reduces the pressure on Iran without receiving anything tangible in return, and the Iranians who laughed all the way to the bank are themselves saying that this deal has saved them.”
That being said, diplomatic officials clarified that Jerusalem was well aware the agreement is a done deal, and that now the focus will be on “what happens down the line.”
“Israel intends to be a player,” an official said, first and foremost in consultations with the US, but also with the other members of the P5+1.

Herb Keinon contributed to this report.