John Kerry: US not 'blind' or 'stupid' in Iran nuclear talks

US secretary of state tells NBC that America remains skeptical of Iran's willingness to dismantle its nuclear program and will keep sanctions in place; meanwhile, Washington's top negotiator with Iran arrives in Israel. 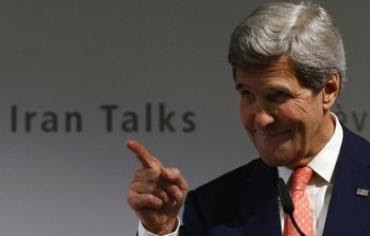 "We are not blind, and I don't think we're stupid. I think we have a pretty strong sense of how to measure whether or not we are acting in the interests of our country and of the globe," Kerry said on NBC's "Meet the Press."


The United States and its allies narrowed their differences with Tehran in talks over the weekend, but were not able to reach a deal as France believed the proposal did not adequately neutralize the risk of an Iranian atom bomb.
Israel has also voiced skepticism, warning that the Iran cannot be trusted until it dismantles its nuclear program, and it "utterly rejects" a deal which includes easing sanctions.

Kerry said the United States is aiming to get Tehran to halt further nuclear development as a first step toward a complete dismantling of the program. Washington will keep sanctions in place in the meantime, he said.
"Nobody has talked about getting rid of the current architecture of sanctions. The pressure will remain," he said.

Meanwhile, Washington's top negotiator with Iran, Wendy Sherman, arrived in Israel Sunday for a day of talks to brief Israel on the P5+1 negotiations with Iran.
Sherman, the undersecretary of state for political affairs and number three person in the State Department, was scheduled to meet national Security Advisor Yossi Cohen and top foreign and defense ministry officials.

She is not scheduled to meet Netanyahu, who has been unsparing in his criticism of the deal that was discussed over the weekend with Iran.

Sherman leads the US delegation to the talks. According to an American official, her meetings in Israel are part of "continuing our close coordination with Israel about our ongoing efforts to prevent Iran from obtaining nuclear weapons."
Sherman generally comes to Jerusalem to brief Israeli officials after each round of negotiations with Iran.