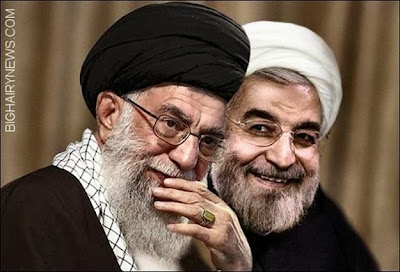 It's not just the Obama administration that's buying into 'moderate' Iranian President Hassan Rohani's charm offensive. After all, the Obami have been looking for an excuse to 'engage' with Iran for the last six years. But some US Senators are also buying into the 'new tone' from Iran, and that could mean a delay in more sanctions against Iran.

The Senate Banking Committee had been due in September to look at a new package of sanctions passed in July by the House of Representatives, but now it will not do so for at least a few more weeks, an aide said.

That could create a better atmosphere at talks between Iran and six major nations in Geneva on October 15-16, the first such encounter since President Barack Obama and new Iranian President Hassan Rouhani held a historic phone call last week.

While the sanctions issue has been slowed by congressional wrangling over the US government shutdown, lawmakers acknowledged that the idea had come up of deliberately delaying new sanctions to improve the mood at the Geneva talks.

"There's been some discussion about whether it's best right now, while the negotiations are occurring, just to keep the existing ones in place," Senator Bob Corker, the senior Republican on the Senate Foreign Relations Committee and a member of the Banking Committee, told Reuters.

He stressed that Congress generally remains deeply suspicious of Iran and supportive of tougher sanctions.

Catherine Ashton, the European Union's foreign policy chief, made clear on Monday she would prefer US lawmakers and others not to impose additional sanctions before the nuclear talks.

"I would like to get to Geneva with the best possible atmosphere to really have these negotiations," she said.

Congressional aides familiar with the issue said some Obama administration officials have been quietly pressing for Congress to hold off.

The wolf in sheep's clothing is fooling the sheep.... What could go wrong?
Posted by GS Don Morris, Ph.D./Chana Givon at 9:44 AM