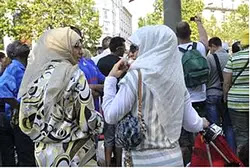 The IDF and Border Police invest massive efforts into protecting the barriers that separate the Palestinian Authority from areas of pre-1967 Israel, and PA officials are intent on transforming those lines into permanent borders – if not pushing them back even farther.

Nevertheless, PA Arabs work hard to infiltrate into the other side of the barrier, where much of Israel’s Jewish population resides.

In this instance, an officer of the Gal Battalion waved the #143 public bus over to the side of the road for a routine security check before allowing it through the Hizme checkpoint in Samaria.

While heading towards the back of the bus, he notice two women wearing the hair covering that is common to observant Jewish women. At least one was holding a siddur, a Jewish prayer book.


But something was odd: both were acting strangely, looked more tense than usual, and the one holding her prayer book was gripping it upside down.
Upon checking their identities, it became clear that both were actually PA Arab residents of Ramallah, in their thirties who were trying to enter Israeli territory.  When the truth was were revealed, they were removed from the bus and taken for investigation to rule out involvement in terrorist activity.
It is not uncommon for PA Arabs to try to sneak through the crossings, sometimes for work, sometimes for social reasons. They also try to sneak through the crossings in order to murder Israelis – the reason a security barrier was erected a few years ago, despite the rage it has evoked from Arabs and leftists alike.