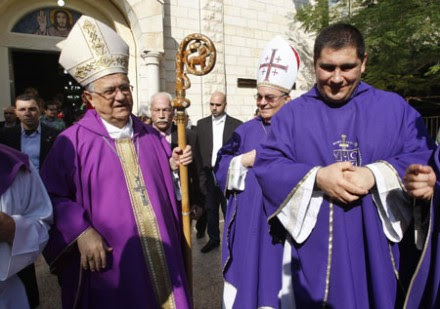 Latin Patriarch Fouad Twal visits Gaza (Photo: CNS)
Five schools in Gaza – two Catholic and three Christian – face closure if the Hamas government follows through on an order forbidding co-educational institutions, according to the director general of Latin Patriarchate Schools in Palestine and Israel.
Fr Faysal Hijazin said: “This will be a big problem. We hope they will not go through with it, but if they do, we will be in big trouble. We don’t have the space and we don’t have the money to divide our schools.”

In addition to finding additional space, he said, the schools face having to hire more teachers. Men and women teachers would not be allowed to teach classes of the opposite sex older than 10 under Islamic law.
“We will never accept this even if we have to close the schools,” Fr Hijazin said.
He said Latin Patriarch Fouad Twal of Jerusalem hoped to speak with Gaza’s prime minister, Ismail Haniya, to discuss the Church’s concerns.
The patriarchate administers the Latin Patriarchate School, with 370 students, and the Holy Family School, with 650 students. In addition, the Rosary Sisters operate their own school. The majority of the students enrolled in the schools are Muslim.
Four of Holy Family School’s recent graduates are Christian.
Fr Hijazin said that although the order did not specifically single out the Christian schools, the five are the only schools with mixed enrollment in Gaza.
“It is a concern that in education things are getting more conservative,” he said. “It reflects the whole society. This is of concern to both Christians and moderate Muslims. It is not easy to be there.”