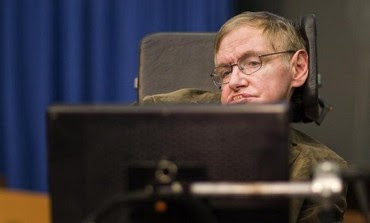 Stephen Hawking Photo: REUTERS/Valentin Flauraud
BEIJING/LONDON – Prime Minister Binyamin Netanyahu slammed Prof. Stephen Hawking for joining the boycott against Israel and cancelling plans to attend President Shimon Peres’s conference next month, saying the celebrated physicist should “study the facts.”
Asked by The Jerusalem Post about Hawking’s boycott at a press briefing, Netanyahu said, “He should investigate the truth, he is a scientist. He should study the facts and draw the necessary conclusions: Israel is an island of reason, moderation and a desire for peace.”
Netanyahu said that Hawking knows that there are many false theories in science. “There are also false theories in politics, and this [the slandering of Israel] is one of them, maybe the foremost among them,” he said. “There is no state that yearns for peace more than Israel, nor any state that has done more for peace than Israel.”
One official in the prime minister’s entourage went even further, comparing Hawking to Shakespeare and Voltaire, both of whom held anti-Semitic sentiments.

“History shows that there are people who are no less great than Hawking who believed things about Jews that it was impossible to imagine they actually believed,” he said. “I am talking about Voltaire, or Shakespeare. How do you explain that someone with the encyclopedic knowledge of Voltaire believed what he did about the Jews. How can you explain it? But it is a fact.”
Apparently, the official continued, “intelligence and achievements are no guarantee for understanding the truth about the Jews or their state.
What was true regarding Jews for generations, is now true about the state of the Jews.”
Meanwhile questions have been asked as to why Hawkins felt it fit to visit Iran in 2007 and China in 2006.
Left-wing political blog Left Foot Forward, sister-site of the US blog Think Progress, questioned why Hawking visited China “where some of the most visible and egregious human rights violations committed by the Chinese state have occurred” and were highlighted by Human Rights Watch several years before his visit.
Commenting on Iran, the blog said: “As far as I am aware, there was no statement at the time from Hawking refusing to travel to the Islamic Republic out of “respect” for the country’s political dissidents, or until the government stopped executing homosexuals.”
In summary, Left Foot Forward said: “Is Israel uniquely bad, or has hypocrisy towards the Jewish state become so widely accepted among some progressives that even an eminent scholar like Hawking is susceptible to hypocritical and lazy double standards?”
Cambridge University said on Thursday that The Jerusalem Post was the catalyst behind the decision to retract its statement about Hawking’s ill health and confirm what was really behind his decision to withdraw from next month’s Presidents of Major American Jewish Communities Conference.
On Wednesday morning the university had released a statement saying the renowned physicist pulled out of the Jerusalem event because of ill health.
“Professor Hawking has decided to cancel his planned visit to Israel on the advice of doctors,” the spokesman said.
Later that day, the university retracted this after the Post showed proof that Hawking had told organizers of the June 18-20 conference that pressure from Palestinian academics made him withdraw.
“I have received a number of emails from Palestinian academics,” Hawking said in the letter. “They are unanimous that I should respect the boycott. In view of this I must withdraw from the conference.”
When this was put to Tim Holt, acting director of communications at Cambridge, he was surprised and said he would look into it. Hours later, the university retracted its statement and confirmed that Hawking withdrew in order to respect the boycott.
“We had understood previously that his decision was based purely on health grounds, having been advised by doctors not to fly,” Holt said. On Thursday, Holt said that the information from the letter provided by the Post had made them amend their position.
“When we realized that the letter was being made public by you [the Post] we changed the statement to reflect this.
Prof. Hawking’s health is a factor and his doctors have indeed instructed that he should not travel,” he said.