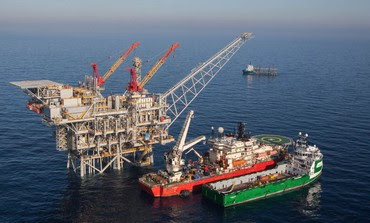 Tamar natural gas rig. Photo: Albatross
A new and potentially robust “shark” may be floating in the Mediterranean’s eastern waters.
A significant gas presence on Wednesday evening was reported from the Karish 1 well (shark in English), located about 75 kilometers northwest of Haifa, said The Delek Group, an Israelbased conglomerate and gas provider.
While official analyses of the drilling results will be conducted by Netherland, Sewell – Oil & Gas Engineering Consulting Services (NSAI) and published within the next two months, the Delek Group and its partners are stressing that there is likely a sizable gas presence in the well, which is located within the Alon C basin.
Alon C stands just northeast of the 282-billion-cubic meter Tamar basin that is already flowing into Israel’s gas pipes, and further northeast of Tamar’s neighboring – and roughly 535- billion-cubic-meter – Leviathan reservoir.
Preliminary estimates from NSAI have revealed that Karish 1 probably contains about 57 billion cubic meters of gas, the Delek Group said.
Through two of its subsidiaries, Delek Drilling and Avner Oil Exploration, the Delek Group holds a total of 53 percent of interest in Karish 1, while Houston-based Noble Energy holds 47%. All of these partners are also stakeholders in the much larger Tamar and Leviathan projects.
“This is proof of the power of the Israeli gas industry and of the great gas potential that exists off the coast of Israel, and we must keep up the momentum,” said Delek Drilling chairman and Avner Oil Exploration CEO Gideon Tadmor.
“These tidings from Karish join the growing volume of gas in Leviathan that was just announced two weeks ago. The energy security of Israel is intensifying with each discovery, and we cannot stop the momentum that has been created for the establishment of an Israeli natural gas industry.”
This future natural gas industry, Tadmor explained, will allow the State of Israel to thrive with an additional hundreds of billions of shekels that come from taxes and royalties generated from gas extraction.
Although the Tamar reservoir will be for domestic use only, the government is expected to allow Leviathan to serve both domestic and export purposes.
However, a heated debate surrounds the conclusions of the Zemach Committee, which has recommended allowing no more than 50% or up to 500 billion cubic meters of gas for export.
Such allowances, environmentalists continue to argue, are too high and will hinder Israel’s own gas needs in the future. The drilling firms, on the other hand, argue that the state cannot encourage further explorations in the region without a solid and substantial export policy – from which the companies know that they can generate a stable profit.
“Natural gas discoveries are a significant growth engine for the economy,” said Delek Drilling CEO Yossi Abu.
“Exports in significant quantities encourage additional players from Israel and abroad to invest heavily in additional exploration, and the experience in the world and in Israel proves that when you search for more gas you find more gas.”
Energy and Water Minister Silvan Shalom praised the announcement of the likely significant finds in Karish on Wednesday night.
“Increasing the supply of natural gas in the reservoirs will allow us to provide more gas to the local market and increase state revenues, which will be directed into investments in education, welfare, health and in the Negev and Galilee for the benefit of Israel’s citizens,” Shalom said.

Nice blog. Delek Drilling and Avner Oil Exploration, prior to the merger, have held stakes in large Israeli gas fields