Reports of foiled operations might stand as "tipping point" for EU to include Hezbollah on blacklist. 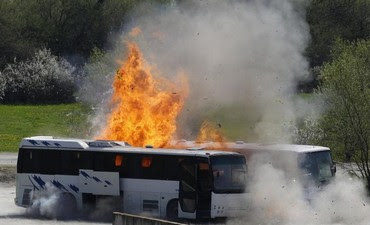 A bus is blown up during a controlled explosion by investigators probing Bulgaria terror attack Photo: reuters
As the European Union grapples with a ban of the Lebanese Shi’ite organization Hezbollah within its territory, reports emerged last week of foiled Iranian and Hezbollah terror and criminal plots against targets spanning Bulgaria, Nepal, Canada and the US.
Will the mushrooming patchwork of global terrorism push the EU to include Hezbollah in its terror list? An EU designation could deal a one-two punch to the Lebanese group and its chief proxy Iran.

Last week, Canadian police officials charged Tunisian Chiheb Esseghaier and Palestinian Raed Jaser with planning an “al-Qaida-supported” attack on a passenger train from Toronto to New York City. The Royal Canadian Mounted Police’s assistant commissioner James Malizia accused the two men of securing “direction and guidance” from al-Qaida elements in Iran.
Sheryl Saperia, the director of policy for Canada at the Foundation for Defense of Democracies, spoke to The Jerusalem Post on Friday. “Importantly, Canada also listed Iranian-sponsored Hezbollah as a terrorist organization over a decade ago, at the same time as it did al-Qaida,” she said.
“The Iran-IRGC [Revolutionary Guards]-Hezbollah trifecta is widely recognized by the intelligence and security establishment as being responsible for horrific terrorist attacks throughout the world. Canada understands this. The EU should, too,” Saperia continued.
Reports in Canada’s National Post and the Jerusalem Post – confirmed through multiple sources – state that Bulgarian police authorities arrested an Iranian woman, in possession of a Canadian passport, who scouted the Chabad center in Sofia. The Iranian woman’s surveillance mission in July 2012 came on the heels of a July terror attack resulting in two alleged Hezbollah operatives blowing up an Israeli tour bus in the Black Sea resort of Burgas in Bulgaria.
US and Israeli intelligence officials initially attributed the Burgas attack, which killed five Israelis and their Bulgarian bus driver, to a joint Hezbollah-Iran operation. Europol’s (the European Police Office’s) 2012 counter-terrorism report noted on Friday that “indications suggest possible links” between Hezbollah and the Burgas bombing.
There are hints that Germany’s Interior Minister Hans- Peter Friedrich may recommend to Foreign Minister Guido Westerwelle that Hezbollah’s entire organization should be outlawed in Europe.
In an April telephone interview with the Jerusalem Post, a spokesman for Friedrich cited the 2003 EU ban of Hamas as example of a possible final German position. The EU labeled Hamas a terrorist organization in 2003 and did not split its organization into military and political wings.
The spokesman was cautious and said the interior minister has turned to his counterparts in Cyprus and Bulgaria to secure additional evidence of Hezbollah terrorism.
“It depends on Bulgaria and Cyprus” and “whether the evidence meets a ban of the full structure [Hezbollah],” said the spokesman. He added that the evidence could also lead Friedrich to recommend a partial ban of Hezbollah’s military wing or no designation of the Lebanese organization.
A Cypriot criminal court convicted last month a self-professed member of Hezbollah for plotting to murder Israelis on the island. Writing on the online investigative-journalism publication ProPublica, Sebastian Rotella cited a US counter-terrorism official in his article: “How Hezbollah wages its secret war against Israel.”
“Even before the Burgas attack, we were growing concerned about what Hezbollah is doing around the world,” the US official said on ProPublica.
“They are plotting in a way we hadn’t seen since the 1990s.There is certainly a feeling that Iran and Hezbollah have ramped up their networks.”
The disclosure last week about the Iranian woman monitoring the Chabad center is one more element in Iran and Hezbollah’s overt and covert war against Israeli and Jewish institutions across the globe. A Nepali paper reported last week that a highly suspicious Iranian man was detained by Israeli Embassy officials in Katmandu for surveillance of the diplomatic facility.
US and Canadian efforts to ratchet up the pressure on Europe to evict Hezbollah from the 27-member EU body have been front and center in the media and policy branches.
In a National Post opinion article in April, Canada’s foreign affairs minister, John Baird, wrote, “Since it reared its ugly head in 1982, Hezbollah has become one of the most technically advanced terrorist groups in the world. It is a grave threat to security and stability in the Middle East and beyond. While Hezbollah hides behind its social programs, it remains, in its heart and deeds, a terrorist entity.”
And in a clear message directed at Hezbollah’s use of criminal enterprises mixed with fund-raising for terrorism in Europe, the Obama administration sanctioned two Lebanese money-exchange houses for conducting Hezbollah’s financial transactions related to illicit narcotics.
The Wall Street Journal reported, “The alleged [drug-]trafficker, Ayman Joumaa, is a joint Lebanese and Colombian national that the US charged with trafficking tens of thousands of kilograms of cocaine from Colombia to Europe, West Africa and Latin America.”
US, Dutch and Israeli counter-terrorism experts have long criticized Europe for allowing Hezbollah wide latitude to raise money in Europe for its terror operations and criminal enterprises.
France and Germany – the main Continental European powers – have resisted US, Canadian, Dutch and Israeli efforts to rescind their opposition to banning Hezbollah.
Now that a new string of Iranian and Hezbollah terror and criminal operations have been exposed over the past week, the growing evidence might very well be a tipping point to the hold-out EU countries.

Benjamin Weinthal is a European affairs correspondent for the Jerusalem Post and a fellow with the Foundation for Defense of Democracies.