Rise of the Militias in the Middle East 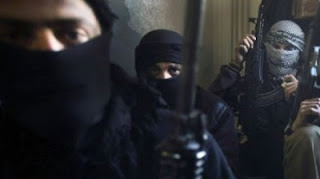 “Hey! think the time is right for a palace revolution, but where I live the game to play is compromise solution…”

–The Rolling Stones, “Street-Fighting Man”
Quite a bit of the recent news flowing out of the Middle East has an interesting common thread. Whether it’s Syria, Iraq, Egypt, or Tunisia, all states once known for their strong military leadership, the new power players may not be wearing the uniforms, but they’ve still got the guns.

On the Syrian front it was recently reported that Iran and Hezbollah are preparing a militia,
with as many as 50,000 fighters
,according to the Iranians, to deal with the potential post-Assad era.  If Assad does fall, the goal would be to use these militiamen to secure key Syrian territory, enabling Iran to continue to control supply lines to Hezbollah in Lebanon and maintain its influence. Despite suffering from financial sanctions, Iran is reportedly funneling millions of dollars in cash and equipment to their newest proxies.


This is an Iranian specialty. Even if you lose the war, you can still win the post-war chaos. They have played a similar game in Iraq with great success. So pervasive is the Iranian presence in Iraq that the Sunni opposition there has accused Iraqi Prime Minister Maliki of granting Iran permission to bring in 50,000 Iranian Basij militiamen to crack down on protestors and target foreign embassies, including that of the U.S. While the Middle East has always been fertile soil for rumors and conspiracy theories, there’s likely a sliver of truth in the claim, with Iranian agents active on the ground in Iraq. Iran’s Basij militia is often credited with the regime’s success at putting down opposition after the fraudulent election in 2009.
That proven capability to suppress protests has been central to Iranian discussions with the new Muslim Brotherhood-dominated government of Egypt’s President Mohammad Morsi as well. Rumors have continued to swirl that Iran may provide advice and assistance to establish a Muslim Brotherhood militia to help defeat street protests there. Other reports indicate that the Muslim Brotherhood may be able to rely on the Iranian-armed Muslim Brotherhood-offshoot Hamas to provide 7,000 fighters to secure Morsi’s rule.
In Tunisia, a vocal anti-Islamist politician, Chokri Belaid, was recently assassinated, leading to street clashes between secularists and the leading Islamist Ennahda party. While the secular left in Tunisia still controls major labor unions, and so maintains a base of power, protestors suffer from continued violence from the pro-Ennahada militia.
The power of sectarian, ethnic, tribal or party militias are greatest in regions where national identity has never really taken root, and the Middle East is one such region. For most of the Middle East, local loyalties have been either sectarian or tribal, while the ideologies that have held sway are supra-national in origin, with either Islam or Pan-Arab nationalism as the guiding belief system.
Thus it is no surprise that, as Daniel Pipes pointed out in a recent article, the United State’s continued focus on creating national armed forces and other national institutions in these states has historically failed, and continues to fail. There is little use in bringing an F-16 to a street fight. Yes, Morsi’s Egypt will gladly take delivery of modern military technology, but his regime’s security is better served by thugs on motorbikes with guns and leather jackets than by fighter jocks in F-16 fighters. And he knows it.
There are forces in the region deserving of American support. Secular activists in Egypt and Tunisia, although small and routinely disorganized, are worthy of recognition. And ethnic and religious minorities including Christians, Kurds and Druze in Syria are sympathetic to our democratic values and all likely to be on the receiving end of violence from both Iran’s new militia and the majority Sunni-rebels if Assad should fall. Unfortunately, it’s unlikely that the U.S. will play a role in safe guarding these communities or giving them the ability to safeguard themselves.
The Obama administration has shown it is far more comfortable negotiating across the table from the Islamists, whether from Iran or the Muslim Brotherhood, than it is reaching out to secular and minority groups. And while U.S. officials at the CIA and the Pentagon expressed confidence that they could vet recipients of U.S. arms in Syria, the administration’s track record in this area is not good.  Where the administration has played the militia game, they generally have failed.  For example, they selected the February 17th Martyrs’ Brigade to help guard the Benghazi Consulate. They ended up selecting a Muslim Brotherhood-linked militia that conveniently “failed to respond to repeated calls for assistance” when the Consulate came under attack.  Not encouraging.
So U.S.-manufactured weapons of war serve no good purpose (nor does the American influence they allegedly purchased), while the Islamist rulers establish and maintain their territories using the truncheons and bicycle chains of their militias against the remaining secularists and minorities. While the current administration continues to believe that the time is right for a compromise solution, it seems that in the Middle East “the time is right for fighting in the streets.”