F-16′s in hand, Morsi cracks down on Egptians

It sure does not seem such a smart thing to have sent Egyptian President Mohamed Morsi those F-16′s. The Post reports: “Egyptian President Mohamed Morsi declared a state of emergency and nighttime curfew across three major cities Sunday after violence raged for a third straight day, leaving nearly 50 dead and hundreds injured nationwide. The deployment Saturday of government troops to the coastal cities of Port Said and Suez, which have seen some of the worst violence, failed to quell a public backlash against a court verdict and raised doubts about whether Morsi’s embattled government could contain the situation.” 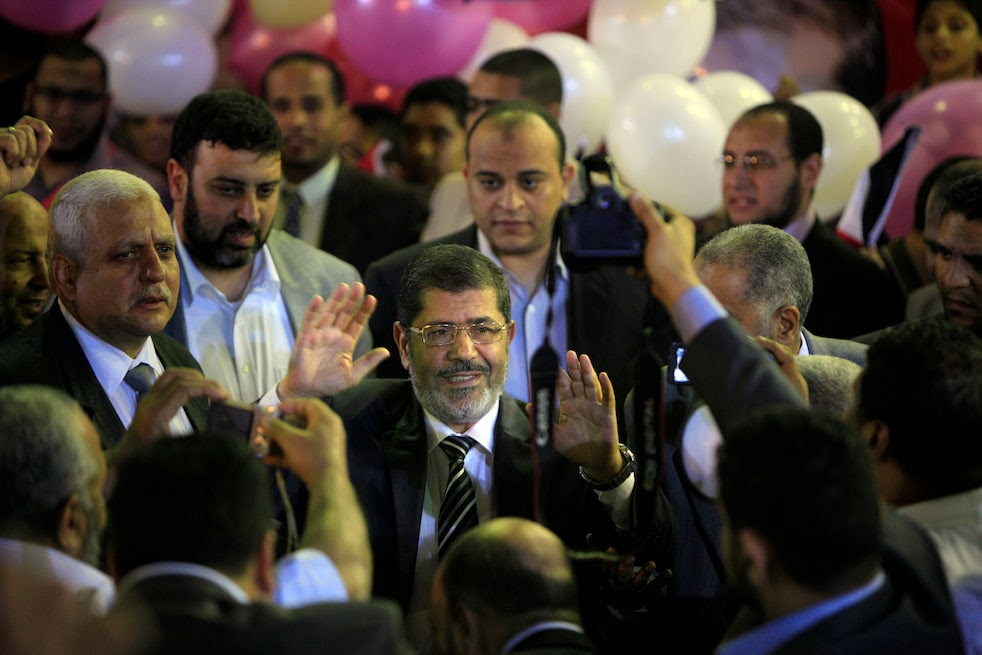 Egypt’s President Mohammed Morsi last April (Amr Nabil / Associated Press)
To recap, we helped shove off the stage the dictatorial Hosni Mubarak and welcomed, indeed have enabled, the dictatorial Morsi — who, unlike Mubarak, is also a committed Islamist and overtly antagonistic toward Israel. So why exactly did we unconditionally release all that aid and provide top-grade aircraft to Morsi?
Sen. Rand Paul (R-Ky.) (before Morsi’s latest crackdown) sounded a heck of a lot more sane than does the administration on this subject:
Click here to see video

If only President Obama and his team were as informed and clear-headed we might not have given over the F-16′s, only to be humiliated by his anti-democratic crackdown days later.
Of course, it is entirely possible that the delivery of the F-16′s and the emergency crackdown were not unrelated. As one report noted:  ”Egypt has concluded that the delivery of advanced F-16 multi-role fighters marked U.S. support for the Islamist regime of President Mohammed Morsi. . . . Sawfat Al Zayat, a retired Egyptian Army brigadier general, said the F-16 deal was a signal by Washington of support for Morsi in wake of Egypt’s mediation that ended war between Israel and Hamas in November 2012. Al Zayat said the message was meant to the Egyptian military as well as the opposition.” In other words, why wouldn’t Morsi think he could act with impunity?
The goal of the administration, we were told, was to support the aspirations of Egyptian and other Arab Spring people in the quest for more humane, more democratic and hence more stable regimes. But now we are aiding and abetting a leader who has turned a blind eye toward attacks on Christians, defamed Jews and the Jewish state, vowed to obtain the release from U.S. prison of terrorist Omar Abdel-Rahman and entirely failed to progress toward that freer and more pluralistic society Obama said we were supporting. We are not winning the hearts and minds of Egyptians; we’re been taken for a ride by their oppressor.
Isn’t it time to reevaluate our Egypt policy — or at least have one?