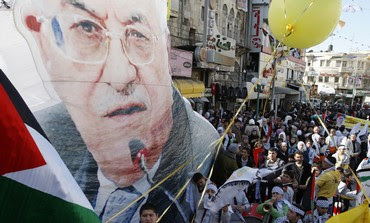 The positive atmosphere that prevailed between Fatah and Hamas following Operation Pillar of Defense and the UN vote in favor of upgrading the Palestinians’ status appeared to have ended Thursday, as the two rival parties resumed their verbal attacks on each other.
The new crisis erupted after Fatah announced the cancellation of celebrations in the Gaza Strip that were scheduled for the end of this month to mark the 48th anniversary of its founding.
Fatah officials in Gaza said they had decided to cancel the events because the Hamas government would not allow them to hold rallies in two of Gaza City’s main squares.


Hamas has banned Fatah from holding major rallies in Gaza ever since the Islamist movement took control of the area in 2007. Fatah, in contrast, recently permitted Hamas to celebrate its anniversary in several West Bank cities for the first time since that year.

In the wake of the recent rapprochement between the two parties, the Hamas government announced two weeks ago that it had given Fatah permission to celebrate the event in the Gaza Strip. However, it rejected Fatah’s demand to hold the rallies in two squares and offered alternative venues, including the Yarmouk Stadium in Gaza City and the site of former Jewish settlements.
Hamas spokesman Sami Abu Zuhri cited security reasons to justify his movement’s opposition to holding Fatah rallies in the two squares.

He claimed that information Hamas had received indicated that “saboteurs” were planning to attack the Fatah rallies. He did not provide further details, nor did he identify the “saboteurs.”
Abu Zuhri denied Fatah claims that Hamas had banned the rallies. He said such talk was “very negative and unsuitable.”
The Hamas spokesman said his movement’s agreement in principle to allow the rallies to take place in the Gaza Strip was a “positive step aimed at paving the way for Palestinian reconciliation.”
Another Hamas official said his movement was worried that supporters of ousted Fatah operative Muhammad Dahlan, who fell out with Palestinian Authority President Mahmoud Abbas, were planning to disrupt the rallies and turn them into anti-PA events.
However, Yehya Rabah, a senior Fatah official in the Gaza Strip, held the Hamas government fully responsible for the cancellation of the events.
Rabah said Fatah had tried over the past three weeks to reach agreement with Hamas over the venue of the rallies, but to no avail. Egypt and Qatar also tried to mediate between the two sides to solve the crisis, he added.
The Fatah official confirmed that Hamas had proposed two alternative locations for the rallies, but he said the former Jewish settlement areas were lacking in infrastructure, and the Yarmouk Stadium was in danger of collapsing since Israel had bombed it during the last war.