The Escalating Conflict Between Hamas and Israel 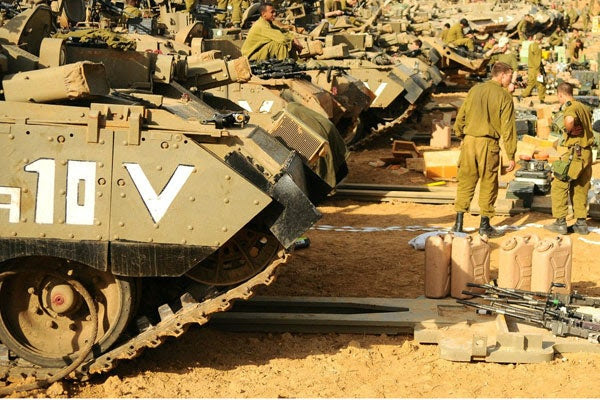 Over the last four days, militants in Gaza have fired more than 840 rockets at Israel. Hamas rockets have reached the outskirts of Jerusalem and Tel Aviv for the first time, thanks to the smuggling of Iranian rockets into Gaza. The increasing range and sophistication of Palestinian rockets has expanded the reach of terrorists, who now can threaten up to half of Israel’s population.
Israel has intercepted 302 of those rockets with its Iron Dome missile defense system, according to the Israel Defense Forces. Iron Dome, on which the U.S. has collaborated, has proven its worth and underscored the importance of missile defense in future U.S. military budgets.
Meanwhile, Iran is seeking—successfully—to keep the pot boiling at Israel’s expense to distract international attention from its nuclear program. A leaked International Atomic Energy Agency report indicates that Iran could soon double the number of centrifuges at its Fordo facility from 700 to 1,400.

President Obama spoke out on the fighting yesterday, saying Israel has the right to defend itself against Hamas’s missile attacks from Gaza. But he urged Israel not to launch a ground assault in Gaza, saying it would put Israeli soldiers, as well as Palestinian citizens, at greater risk and hamper an already vexing peace process.
“If we see a further escalation of the situation in Gaza, the likelihood of us getting back on any kind of peace track that leads to a two-state solution is going to be pushed off way into the future,” Obama said.
This public statement will only strengthen Hamas’s determination to continue its rocket terrorism and reap the propaganda benefits from Israeli retaliatory air strikes, because the President’s statement lowers the perceived risks of an Israeli ground intervention. Moreover, it is continued Palestinian terrorism that is the chief barrier to peace, not Israel’s legitimate efforts to protect its own citizens from indiscriminate Palestinian terrorist attacks.
Egypt, Turkey, and the Arab League have heavily criticized Israel and called for a halt of air strikes. Hamas is an offshoot of the Muslim Brotherhood and hopes to pull in Egypt’s Muslim Brotherhood-dominated regime to tilt the balance against Israel. Egypt’s government will seek to have its cake and eat it, too, in the sense that it will use the crisis to denounce Israel, support Hamas, and play to anti-Israeli sentiments at home while trying to mediate a ceasefire behind the scenes that enhances its influence and justifies continued U.S. and Western aid.
If they genuinely wanted to stop the bloodshed, then these leaders should pressure Hamas to stop the bombardment, which triggered the crisis.
Obama, too, should aim primarily at restraining Hamas, not Israel.
Hamas, as usual, is bent on advancing its radical Islamist agenda at the expense of Palestinian national interests. It is a revolutionary movement more interested in destroying Israel than in building a Palestinian state or protecting Palestinians from another humanitarian tragedy that it has engineered.
Israel has called up 75,000 reservists and massed armor and at least 30,000 troops along the border, underscoring that it is serious about launching a ground intervention if Hamas continues its indiscriminate bombardment of Israeli civilians.
The U.S. needs to stand with Israel against terrorism and support its right to defend itself against a ruthless enemy that hides among Palestinian civilians to launch rockets indiscriminately at Israeli civilians. Hamas routinely uses children as shields. There can be no Israeli–Palestinian peace until Hamas and other Islamists are defeated and discredited.
James Phillips is the Senior Research Fellow for Middle Eastern Affairs in the Douglas and Sarah Allison Center for Foreign Policy Studies at The Heritage Foundation. He has written extensively on Middle Eastern issues and international terrorism since 1978.
Quick Hits: