Contrary to the Palestinian Authority's claim that it recognizes Israel's right to exist, PA TV and official cultural events continue to reinforce the message of non-recognition of Israel by depicting all of Israel as "Palestine." 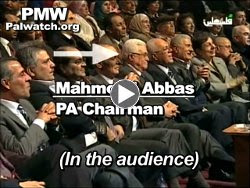 This month marked the 27th broadcast by official PA TV of a song that presents all of Israel's land as Palestinian land. The song was originally performed at a Fatah event last year in the presence of PA Chairman Mahmoud Abbas and many other senior PA officials. The Palestinian singer declares that "my land" and "our coast" span from Rosh Hanikra in Israel's north to Rafah in the Gaza Strip in the south, and from Haifa on Israel's western coast to Beit Shean on Israel's eastern border. The fact that PA TV, which is under the direct control of Abbas' office, chose to broadcast this song numerous times, suggests the centrality of the song's message to PA ideology.

Palestinian Media Watch has documented this ongoing PA policy of depicting a world in which "Palestine" exists and replaces all of Israel.


The following are the words of the song: