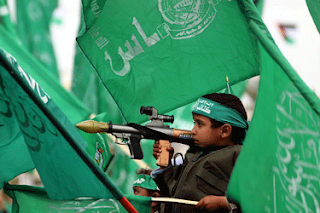 The Palestinians have been in the news thanks to Newt Gingrich calling them an “invented” people seeking Israel’s destruction. A Palestinian event a couple of days later got much less coverage—even though it bore out at least the second part of that description.

Hamas, which rules Gaza and won the Palestinian parliamentary elections resoundingly in 2006, has celebrated the 24th anniversary of its founding with a gala gathering of 350,000 in Gaza City. At it Hamas leader Ismail Haniyeh proclaimed:

Resistance is the way and it is the strategic choice to liberate Palestine from the (Jordan) river to the (Mediterranean) sea and to remove the invaders from the blessed land of Palestine…. Hamas, together with other stubborn resistance factions, will lead the people towards uprising after uprising until all of Palestine is liberated.The crowd, for its part, responded with chants of “We will never recognize Israel.” To honor the event Hamas’s military wing Izzadin al-Qassam released a statement saying it had killed 1,365 Israelis, perpetrated 1,117 attacks against Israel including 87 suicide bombings, and fired 11,093 rockets at Israeli targets. As Evelyn Gordon notes,

Hamas’ boasts are almost certainly exaggerated: It claims “credit” for more than 80 percent of all Israeli casualties since 1987, whereas Israeli data shows a much more equal distribution between Hamas and its rival, Fatah, aka Israel’s “peace partner.”…

In other words, Hamas’s bloodlust is so intense that it takes “credit” even beyond its actual record of slaughter of men, women, and children. That record includes, for instance (in collaboration with Palestinian Islamic Jihad​), the bombing of the Sbarro pizzeria in Jerusalem in 2001, which killed 18, including children aged ten, eight, four, and two.
And when the “Palestinian people”—the apple of the world’s eye since the 1970s—come out in force as in Gaza City last Wednesday to applaud Hamas, they know exactly who and what they’re applauding.

Is Hamas still popular today in the combined Palestinian entity of Hamas-run Gaza and the Fatah-run West Bank? Indications are that it is. Presidential (and parliamentary) elections for that combined entity have been slated for next May. Khaled Abu Toameh reports that “most Fatah leaders in the West Bank have appealed to [its president Mahmoud] Abbas to run for another term” because “He’s the only one who could defeat Hamas.”

Abbas carries seniority and a pedigree going back to his days as right-hand man of Fatah leader and arch-terrorist Yasser Arafat​. His movement, today, keeps instilling the message that Israel is a usurper to be destroyed. And its top echelon is worried that Hamas, which boasts openly of its murderous toll and this year has again fired hundreds of rockets and mortars at Israel, is so popular that Abbas is the only one who stands a chance against it.

Meanwhile it’s reported that under a congressional proposal, the U.S. would keep sending economic aid to the Palestinians next year so long as they don’t seek membership in any more UN organizations. At the end of October the Palestinians were accepted into UNESCO, implying a statehood status and flouting the terms of the Israeli-Palestinian “peace process.”

A Hamas win in the May elections, however—particularly for the presidential slot—would presumably complicate any plans for continued U.S. assistance, since the U.S. (along with Canada and the EU) formally deigns Hamas a terrorist organization.

But even if the elections are scuttled or Hamas doesn’t take all the bacon, are the “Palestinian people” with their genocidal ethos a fitting destination for U.S. aid?
Posted by GS Don Morris, Ph.D./Chana Givon at 4:41 PM