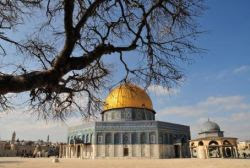 Thousands of Israeli Arab youth are being taught to defend Muslim dominance on the Temple Mount, under programs sponsored by the Islamic Movement, the Israel-based branch of the Muslim Brotherhood.
“This generation will be the generation of victory, the generation that defends the place from which the prophet Mohammed ascended to heaven,” according to Dr. Hikmat Namna of the Organization to Develop Al-Aksa, which has played a part in the educational program.

An estimated 6,000 Israeli Muslim children from 33 Arab towns in Israel have taken part in the program, which includes a tour of the Temple Mount. Children are also given pamphlets with stories about Mohammed and the Al-Aksa mosque.

The northern branch of the Islamic Movement is lead by Sheikh Raed Salah, a Hamas supporter and open enemy of Israel who was recently jailed in Britain for violating a travel ban. Salah has previously stated that Jerusalem and the Temple Mount are exclusively Muslim, and has led attempts to boost the Muslim presence in the area.

The Al-Aksa Organization has released incitement regarding the Temple Mount as well, including accusations of Israeli attempts to damage the Al Aksa mosque and defile the area.
--

Comment: This is but one example of the behavior of our "neighbors" the international community demands we make "peace". Do you know and understand the significance of the Temple mount? Really? Then if your answer is correct and genuine, how can you support their position rather than ours? How could you possibly believe that it is possible to make "peace" with such behavior?
Posted by GS Don Morris, Ph.D./Chana Givon at 4:26 PM