Tom Friedman Has a Dream - Assisted Suicide for Israel 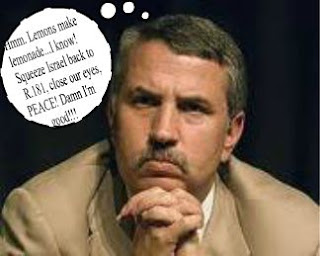 Tom Friedman sucks lemonsIf only there were a few other people on the planet as smart as Tom Friedman. Tom Friedman - assisted Israel suicideHeck, we'd have this whole Arab-Israeli mess cleaned up in a jiffy. Friedman (He works at the NYT. He won a Pulitzer Prize. Why, he's even Jewish! What other genius credentials are there?) finally got tired of waiting for everyone to do their own work and stepped up to the plate. Now he's laid out how to make lemonade from the lemons we have (i.e. those rapacious Israelis and those sometimes naughty Arabs). Just squeeze! Squeeze Israel, that is. Pretend the last 64 years didn't happen, give the Arab another shot at having the state promised them in 1947- which they rejected vehemently and violently - and voila! Peace! And Hamas? Well, we're pretending we're back in '47, so we don't have to worry about them. Terrorism? See no evil, smell no evil, taste no evil. If you can stand it, read the articles about his column, and if you must, read the column itself. Tom Friedman's LemonAde Stand
Sunday, 19 June 2011 21:02
E-mail Print PDF
Jonathan S. Tobin
06.19.2011 - 11:18 AM

Tom Friedman’s New York Times columns on the Middle East conflict are always a maddening mixture of sense and cluelessness. Today’s contribution from the Pulitzer Prize winner is no exception.

Friedman starts by giving a frank and accurate evaluation of the Obama administration’s record in the Middle East. He’s right when he says, “They’ve alienated all sides and generated zero progress.” But he heads quickly downhill from there as he sinks yet again into the quicksand of moral equivalence that renders his evaluation of the situation as useless as those of Barack Obama and Hillary Clinton.

After making a specious comparison between Israel’s democratically elected government and the corrupt terrorist-infested coalition that speaks for the Palestinians, Friedman makes an astonishingly stupid suggestion. Instead of vetoing the Palestinian attempt to get United Nations recognition for a Palestinian state without the Palestinians having to recognize Israel’s legitimacy or give up the conflict, Friedman thinks the United States should support a different sort of UN dictat.

Friedman wants the Security Council to update Resolution 181 which was the original measure supporting the partition of the British Mandate for Palestine into Arab and Jewish states with an international condominium ruling Jerusalem. The new version would again recognize two states but say the 1967 borders would divide the two “with mutually agreed border adjustments and security arrangements for both sides.” According to Friedman, that would make everyone happy. The Palestinians would get their state, and the Israelis would presumably get security and the ability to hold onto parts of Jerusalem and the West Bank with large Jewish populations.
But the problem with this is the same one that sunk the original UN resolution: the Palestinians don’t want to make peace or recognize Israel.

Had the Arabs of Palestine wanted to live in peace alongside the Jews in 1947 when 181 was passed, they could have done so. Their problem with the resolution wasn’t the borders the UN drew up that gave the Jews far less territory and security than even the truncated ’67 lines. It was the idea of letting the Jews have any sovereignty over any part of the country. That’s the same reason why Palestinian leaders have rejected Israel’s offer of a state three times in the last 11 years. And it’s why the Palestinians have walked away from negotiations and ignored President Obama’s attempts to entice them back to the table with his calls for Israeli concessions that have tilted the diplomatic playing field in their direction.

Friedman–who writes this column in his usual graceless, smart-aleck prose style–describes both the Israelis and the Palestinians as lemons from which the Obama administration should concoct UN lemonade. But the real lemon here is Friedman’s refusal to face up to the reality of Palestinian political culture in which their national identity is based on rejection of Zionism’s legitimacy. Any proposed “solution” to the problem that doesn’t take this into account is as useless as a collection of Friedman’s tired columns on the subject.

Jonathan S. Tobin is senior online editor of COMMENTARY magazine and chief political blogger at www.commentarymagazine.com. He can be reached via e-mail at: jtobin@commentarymagazine.com . Follow him on Twitter at https://twitter.com/#!/TobinCommentary.
Posted by GS Don Morris, Ph.D./Chana Givon at 9:02 AM