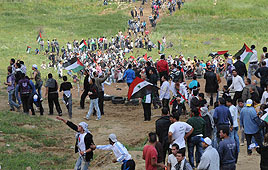 IDF, police deploy in all sectors ahead of 'Naksa Day' despite reports of canceled border marches. 'We won't let anyone infiltrate Israel, and if need be will use live ammunition,' military source says

The Israel Defense Forces and Police are on high alert ahead of 'Naksa Day' marking 44 years since the break out of the Six Day War.

Security forces are gearing up for protests and marches in borders and all sectors, similar to those held three weeks ago on the deadly 'Nakba Day.' The IDF vowed to prevent any infiltration into Israel and is threatening the use of live fire.

Despite reports of a canceled march in Syria, it appears the main focus will be on the northern border where dozens of people infiltrated Israel on 'Nakba Day'. Several were shot to death. The fences have been fortified and forces have been deployed.

Soldiers have been ordered to avoid hurting civilians wherever possible, however senior officers in the field will be allowed to order the use of live fire. "We have no intention of letting anyone in Israel. We shall use our discretion as well as a variety of means and if needed live ammunition will be employed too," a military source said.

The IDF has equipped all forces in the field with crowd-dispersal means and non-lethal weapons.

The army is hoping to prevent protests by leftists or other elements which may create riots and disrupt security forces' activity in case foreign citizens approach the borders. Several roadblocks have been deployed in the northern Golan Heights.

The army is also bracing for rallies near the Lebanese border despite the cancellation of the march to the border. It is nevertheless feared that citizens inspired by Iranian elements will be sent to the border.

'Waiting for out mistake'

Alert level has also been raised across the West Bank. The Central Command has estimated that excluding minor incidents 'Naksa Day' will go over peacefully in the region.

The IDF also fears protestors may reach the fence in the Gaza Strip.

"The common element in all the sectors is that they're waiting for us to make a mistake," the military source said.

"Fatalities on the other side serve a purpose, it complicates matters for Israel on the PR level and gives others ammunition with which to slam us. We shall use discretion but will not allow a violation of sovereignty, unnecessary conflict or damage to infrastructure. That's a red line as far as we're concerned."

Police estimate Sunday's events will go over with relative calm and no specific alerts warning of terrorist attacks were received. Nevertheless, police will raise its alert level to the second highest level.