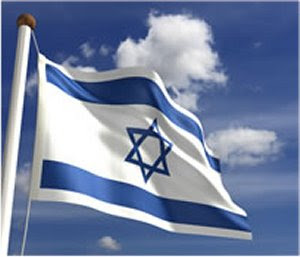 Tonight begins Yom Ha'Atzmaut -- Israeli Independence Day. There are those who have the impulse to remain subdued this year, even as celebration is called for, because of the many troubles we face.

The return of the Jews to our homeland after 2,000 years was a miracle, and our ability over the years to survive and thrive beyond everyone's wildest imagination has been a miracle.

With the help of the Almighty we shall prevail, and we shall grow. Our role is to be strong, and to trust that we can do it.
Aish's musical video -- "Wave Your Flag" -- sings, "When I get older, I will be stronger, they'll call me freedom, just like a waving flag."

Nefesh B'Nefesh is a marvelous organization that has helped thousands of people from English-speaking countries, mostly Americans, to make aliyah. This year, the group held a special celebration honoring the 45 sabra babies born to families that have come over the last year:

How's that for having faith in Israel's future?

JPost editor David Horovitz ran a piece last Friday that I've been saving to share for Yom Ha'Atzmaut. It's called, "Out of the ashes, to the height of self-sufficiency."

Horovitz writes about Benny Gantz, the new IDF Chief of Staff (who came to this position almost by political fluke, but, it seems, was meant to be where he is now).


"The IDF is strong, ready and a deterrent to our enemies," Gantz said during Yom HaShoah ceremonies last week. "It is capable of thwarting any enemy that rises up to kill us." (emphasis added)

"Born in Israel to a mother who was barely alive when she was liberated from Bergen-Belsen, Gantz emblemizes the near-miraculous revival of the Jewish people after the Holocaust: The survivor's child is now chief protector of the insistently surviving nation. (emphasis added)

"Standing tall and straight, Gantz nonetheless carries a perpetual air of concern. He exudes confidence and gravitas but also, in the furrows of his forehead, and the lines around his eyes, shows the burden of responsibility. All the way through to his gut, he knows the evil that humankind is capable of doing to the Jews. He knows that it falls to him, more than anyone else, to ensure that 'never again,' rather than becoming an empty slogan, remains an iron-clad fact.

"...In today's often morally misguided world, it is very difficult to be recognized as both strong and just. Usually, however absurdly in some cases, it is the weak who are automatically regarded as having justice on their side.

As it turns 63, the Jewish nation sometimes feels as though it is back, not in 1948, without a friend in the neighborhood, but a few years earlier still, with barely a friend in the world. But in life-saving contrast to those dark years, we have revived our homeland, and it flourishes.

We are and will continue to be both strong and just. We have built a vibrant, diverse, declaredly contented society. And with an army now headed by a general who emblemizes that rise from the ashes to the height of self-sufficiency, 'we will never tolerate our security being threatened, nor stand idly by when our people have been killed. We will be relentless in defense of our citizens and our friends and allies. We will be true to the values that make us who we are.'" (emphasis added)

Some Interesting Facts about Israel (with thanks to Rebecca M.)

Geography
Israel is only 1/6 of 1% of the land mass of the Middle East
The Kinneret, at 695 feet below sea level, is the lowest freshwater lake in the world.
Israel is the only nation in the world that entered the 21st century with a net gain in its number of trees.
The Mount of Olives in Jerusalem is the oldest continually used cemetery in the world.

And how about this: The most independent and free Arabic press in the Middle East is in Israel .

Stand tall, my friends, hold up your heads and be proud!

Before closing, I want to look back to what I had written yesterday:

A reader has asked me if the number provided of those who fell defending Israel referred only to members of the IDF since the founding of the State. The answer is yes. But the point raised by this question is valid. If not for those who fought for Jewish rights before May 1948, we would not have seen the founding of the State. It certainly did not come about in a vacuum, and those who made the ultimate sacrifice prior to Israeli independence must also be recognized. I am not at all certain, however, that there would be a way to now tally the number who died in this era: there were separate groups, some clandestine, each following its own vision.

After I wrote yesterday's posting I watched the proceedings for Yom HaZikaron at the Kotel. Select family members of soldiers who have died were present and the camera from time to time focused on their faces. They wrenched the heart.

And so I would like to add this: We owe an immeasurable debt of gratitude to all those who have fallen defending the State. But we also owe a debt to those who have lost sons and husbands, fathers and brothers. Theirs is an on-going sacrifice.

Yesterday, when I mentioned various members of Congress who are opposed to providing additional financial support to the PA, I neglected to include Ileana Ros-Lehtinen. Chair of the House Foreign Affairs Committee, she is one of our very best friends. The fact that I've alluded to her many times in the past does not excuse her exclusion here. (Thanks, Stephanie.)

© Arlene Kushner. This material is produced by Arlene Kushner, functioning as an independent journalist. Permission is granted for it to be reproduced only with proper attribution.
Posted by GS Don Morris, Ph.D./Chana Givon at 6:36 PM