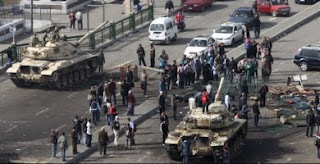 Tens of thousands of protesters are gathering Jan. 29 demanding the resignation of Egyptian President Hosni Mubarak in defiance of an army curfew in Cairo, Alexandria and Suez. While a number of uncertainties remain over Egypt’s political future, a security crisis is building in the streets Egyptian police and Central Security Forces (CSF) have largely abandoned the streets following the Jan. 28 protests. The CSF represents the backbone of the country’s internal security apparatus. Under Mubarak, this force grew to about 325,000, outnumbering the 300,000-strong army (though two-thirds of the army is made up of conscripts and another 375,000 are considered reserves). The CSF, along with the 60,000-strong National Guard, are specially trained and equipped to deal with riots and insurgencies.

STRATFOR sources have reported that the CSF have become severely demoralized after being overwhelmed by the Jan. 28 protest. The local police and CSF are largely staying at home — perhaps encouraged to do so by outgoing Interior Minister Habib Ibrahim El Adly, who was forced to resign Jan. 28 along with the rest of the Cabinet — and allowing the army to handle the situation.

A great deal of animosity exists between the Egyptian army and the CSF, which gets most of its recruits from Upper Egypt where poverty and illiteracy rates are high. A major source of army-police friction stems from the first CSF rebellion in 1986, when the CSF revolted over long working hours and mistreatment by state authorities. The army had to intervene and crush the rebellion, creating a crisis in relations between the police and the military. The second CSF rebellion came in December 2008 during Israel’s Operation Cast Lead in Gaza, when many CSF recruits refused to patrol the Rafah Crossing between Sinai and Gaza and instead wanted to invade Gaza to defend the territory against the Israel Defense Forces.

With no police on the streets, crime has skyrocketed. Prison outbreaks have been reported across Cairo, and criminals spent the night robbing and destroying banks and shops in the resulting chaos. Several central bank offices have reportedly been attacked across Egypt over the past several hours. A STRATFOR source in Cairo explained how impromptu neighborhood watch groups have formed, where civilians are standing guard in front of banks, shops, hospitals and even the national museum to try and deter looters.

This security factor could end up affecting the sustainability of the protests, as many people are too afraid to leave their homes and join the demonstrations for fear of being robbed.

Army personnel in tanks and armored personnel carriers are meanwhile patrolling the major areas where demonstrators are gathering, but their primary mission is to demonstrate the presence of state authority, not to protect the people. The military may still be well-positioned to re-impose order at the highest level of the regime and create the conditions for Mubarak’s departure, but given the hostilities that exist between the army and police and the glaring absence of police on the streets, the military faces an even greater challenge in trying to re-impose security in the country overall.
Posted by GS Don Morris, Ph.D./Chana Givon at 9:17 PM