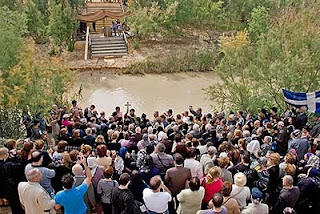 A historical ceremony is planned next week to officially reopen the Qasr al-Yahud ritual baptism site on the Jordan River, east of Jericho, 43 years after it was closed.

But following converns raised by Tourism Minister Stas Misezhnikov, the ceremony is now in danger. Misezhnikov fears that holding the ceremony in such a sensitive place, located within the area conquered in 1967, will stir up international opposition and affect relations with Jordan in the area. Minister for Regional Development Silvan Shalom, however, is still determined to go through with it. Misezhnikov said in harsh letter to Minister Shalom, "I urge you to call off the opening ceremony immediately and hold a discussion with all the relevant people about opening the site de-facto and taking down tourist obstructions."

He explained that "according to the Tourism Ministry, conducting a public ceremony might lead to protest and international objection, including damaging the relations between the State of Israel and the heads of churches, turning the site into a bone of contention."


Misezhnikov warned that holding a public ceremony is not necessary because this is a sensitive issue which might "harm the interests of the State of Israel and of the Tourism Ministry."


The two ministries tried to reach an understanding over the past few days, but after they failed to do so the Tourism Ministry sent the letter to Prime Minister Benjamin Netanyahu, Foreign Minister Avigdor Lieberman, Defense Minister Ehud Barak, the director-general of the Prime Minister’s Office and the cabinet secretary.


Qasr al-Yahud is considered a holy site for the Jewish people. According to tradition, it is the site where the people of Israel crossed the Jordan River on their way to the country. The site is also very sacred to the Christian community, because it is considered to be the place where Jesus was christened by John the Baptist.


Each year over 100,000 tourists visit the Israeli side, arriving at the site even though it has yet to be officially opened to tourists, and about a million tourists on the Jordan side. The holy site was opened for a few days in 2009 during the visit of Pope Benedict XVI in Israel.

Minister Shalom, who visited the site last week, said that "when the site opens we're expecting over 20,000 pilgrims for the epiphany celebrations."


The deputy prime minister added that Israel was working with Jordan to build a dam in order to maintain the water level equable. "We're also planning to renovate Saint John monastery nearby and continue to remove landmines in the area," he said.


The Ministry for Regional Development said in response, "We're sorry that the letter found its way to the media before the minister had a chance to look it over. Qasr al-Yahud is a tourism site which will bring thousands of tourists here. Minister Shalom has worked to renovate and rehabilitate the site so it will become an attractive tourist spot."


The Tourism Ministry said, "It's a sensitive subject with obvious political repercussions, so it demands a long deliberation process with all involved."