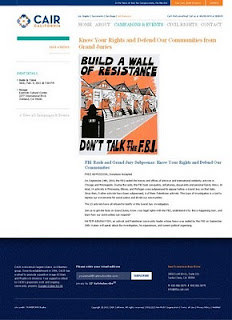 
Any question about the Council on American-Islamic Relations' (CAIR) attitude toward law enforcement in terrorism investigations has been put to rest by the group's San Francisco chapter.

"Build a Wall of Resistance," a poster announcing a Feb. 9 event published on the group's website says, "Don't Talk to the FBI."

A dark, sinister FBI agent is shown lurking in front of people's homes as doors slam shut. It's in response to an FBI investigation in Minneapolis and Chicago involving possible support for two designated terrorist groups, the Revolutionary Armed Forces of Colombia (FARC) and the Popular Front for the Liberation of Palestine (PFLP). A series of raids Sept. 24 targeted the homes of activists in both cities. They claim the investigation is an attempt by Eric Holder's Justice Department to silence anti-war dissent.

"This type of investigation is a tool to repress our movements for social justice and divide our communities," the announcement of the event said.

But that assessment is based solely on the word of those targeted. So far, no official information about the ongoing investigation or the probable cause that led a federal judge to authorize the searches has been released.

In response, however, supporters of those targeted have protested outside of courthouses and federal offices in several cities. The next one is scheduled for Jan. 25 in Chicago and elsewhere, corresponding to compelled grand jury appearances by several people. A website, stopfbi.net, posts articles and updates on the case.

CAIR's Chicago Executive Director Ahmed Rehab called the investigation "a waste of taxpayer dollars." His chapter issued a statement denouncing the September raids. "The FBI has overstepped its bounds in targeting individuals based on their commitment to peacefully challenge US policies in Palestine and Columbia," it said. The Justice Department should call off the investigation and return what was taken in the searches.

Subsequently, Rehab's Michigan counterpart called the raids "a witch hunt to chill the 1st amendment rights of Americans." Dawud Walid later accused the FBI of having "recruited more so-called extremist Muslims than al-Qaida themselves" and likened the use of informants in terrorism-related investigations to the systematic discrimination inherent in Jim Crow laws, and the internment of Japanese-Americans during World War II.

Walid's rants follow his year-long campaign to find fault in FBI's shooting death of a Detroit imam in October 2009 after the imam opened fire first. That effort continued even after separate investigations by the state of Michigan and the Department of Justice found no wrongdoing.

CAIR's hostility toward law enforcement is long-standing, but the organization's rhetoric has increased since the FBI cut off formal communication with the group in 2008. That decision was based on exhibits admitted into evidence during a terror-financing trial in Dallas that showed CAIR founders were part of a Hamas-support network.

"[U]ntil we can resolve whether there continues to be a connection between CAIR or its executives and HAMAS, the FBI does not view CAIR as an appropriate liaison partner," an FBI official explained in a 2009 letter to U.S. Sen. Jon Kyl, R-Ariz.

CAIR petitioned the Texas court to be removed from a list of unindicted co-conspirators in that case. But the district judge refused, ruling there is "ample evidence to establish the associations of CAIR" and others "with Hamas."

It remains to be seen what, if anything, will result from the FBI investigation in Minneapolis and Chicago. CAIR, in one image, has spoken more than 1,000 words about its hostility toward law enforcement.
Posted by GS Don Morris, Ph.D./Chana Givon at 9:57 AM